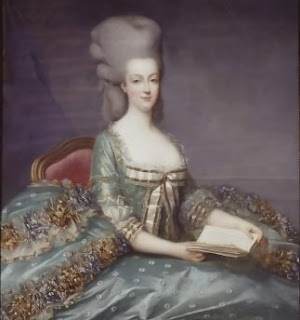 Queen Marie Antoinette is certainly one of the most evocative figures when it comes to monarchy. Probably the simplest way to have some grasp of the tragic queen is to take all of the popular assumptions about her and think the opposite. Born in 1755 she was the daughter of the famous Austrian Empress Maria Theresa and grew up in a sometimes more relaxed atmosphere in Vienna. In 1767 she was married by proxy to the Dauphin of France, Prince Louis Auguste and went to France in 1770. She was at first widely popular with most people though she found the strict etiquette and court ceremonies in France a little difficult to get used to. However, there were some at court who did not like the idea of the next Queen of France being an Austrian and the King suffered a medical problem (and some simple ignorance) that long delayed the consumation of the marriage which greatly distressed all parties concerned.

About the only criticism of the Queen that has any merit at all was that she did tend to spend money too lavishly but she was never arrogant or haughty and always displayed a great deal of concern for the poor. It must also be remembered that she was in a time and place in which extravegance was the norm. In any event, her spending was never nearly enough to cause France any serious distress. The blame for that must fall on the foreign policy of the government, particularly the Seven Years War and the upcoming aid to the American revolutionaries. In 1774 Louis XV died and Marie's husband was crowned His Most Christian Majesty King Louis XVI. She was not crowned with him but became the Queen of France. In 1778 the Queen was greatly relieved to finally give birth to her first child, a daughter, with more to follow.

Her stock rose a few points when she produced an heir to the throne but Louis and Marie Antoinette seemed plagued by a myriad of minor scandals among their courtiers and Marie Antoinette was particularly vulnuerable to baseless criticism. The French accused her of not being 'French enough' and her Austrian relatives accused her of not being 'Austrian enough' when France gave them problems. It was all quite unfair as the Queen was never involved in politics and never influenced political decisions by her husband much one way or the other. She was also the victim of numerous, baseless attacks and smear-campaigns by the anti-monarchy crowd to the point that a minor industry seemed to have grown up around making up the most lewd and atrocious accusations about the Queen.

As to the woman herself Marie Antoinette was a devoted mother, a supportive wife, a kind and caring person and a woman with great curiosity. She loved to read and was interested in a fairly wide array of subjects. Nonetheless, as France slipped ever closer to revolution the Queen was blamed for the most absurd problems which she could never have had anything at all to do with. It was clear she was simply becoming a popular scapegoat. This finally caused her to throw up her hands in disgust and stop being involved in politics at all, even in the most indirect way. When the revolution finally broke she displayed great courage and great loyalty to her husband and family. The long list of horrors she was forced to endure do not need to be dwelt on here but she endured them all with amazing courage, grace and fortitude.

When Louis XVI was executed she was crushed and went into deep mourning. Her health declined rapidly afterwards. Unconcerned with plots to rescue her she had already been robbed of her husband and family, all that she held most dear in the world, and seemed to be preparing herself for martyrdom. When she was finally brought to trial she was charged with a list of crimes so far-fetched, baseless and absurd as to positively stagger the imagination. Yet, her bold defense of herself was so moving she actually won over some of her most bitter enemies in the crowd. Nonetheless, the outcome had never been in question, it was a show-trial from start to finish and on 16 October, 1793 she was convicted of "treason" and executed on the guillotine.
Posted by MadMonarchist at 9:06 PM