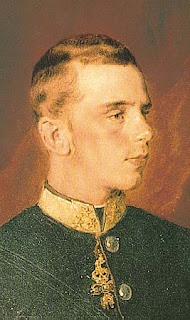 One of the most well-known, true-life royal dramas is that surrounding the double-suicide of the Austrian Crown Prince Rudolf and his mistress Baroness Marie Vetsera at Mayerling hunting lodge in 1889. Everyone knows the tale; the tormented lovers do themselves in and the Hapsburgs close ranks to cover up the facts so as to keep from public view that the heir to the Austrian throne went to hell for being a victim of suicide. That is the story everyone knows, but is it the true story? Recent research has raised some doubts in scholarly circles, yet, could it be that the truth has been widely talked about for quite some time but the "educated" circles turned their backs on it and have only recently been forced by unquestionable evidence to ponder that they might be mistaken?

A very different story was long told by the late Empress Zita of Austria-Hungary, widow of the last Hapsburg Emperor Charles I. According to her foreign agents were trying to drive a wedge between Emperor Francis Joseph and his more liberal son (though when conisdering these terms keep in mind that even Queen Victoria was a liberal compared to good ol' Frankie Joe). When they went so far as to suggest that Rudolf might overhrow his father and become Emperor himself the Crown Prince refused to go along with a plot and as a result these enemies of the Hapsburg empire had to kill Rudolf to keep the conpsiracy a secret. They then murdered the Crown Prince and Baroness Vetsera at Mayerling and made it up to look like a suicide so that it would quickly swept under the rug and forgotten.

For a long time this was dismissed as an effort by the matriarch of the Hapsburg Imperial Family to deny the "shame" of a suicide in their ranks. However, in the early 90's the bodies were re-examined and facts came to light which made the accepted story of a suicide simply impossible. It was found that Marie had been beaten to death and that the remains of Rudolf showed signs as well of a violent struggle before his demise. Still not wishing to back down too far most simply said that this new evidence only meant that the deaths of the pair are an unsolved mystery. However, the evidence fits perfectly with the story long told by Empress Zita who did not have a history of dishonesty to say the very least. To add further doubt to the "accepted" version of events the gun that was found had been fired 6 times even though Rudolf is the only one to have been shot and the weapon was not even his own. In short, it is impossible that the death of the Crown Prince had been a suicide and everything points to the story of Empress Zita being absolutely correct.
Posted by MadMonarchist at 12:11 AM