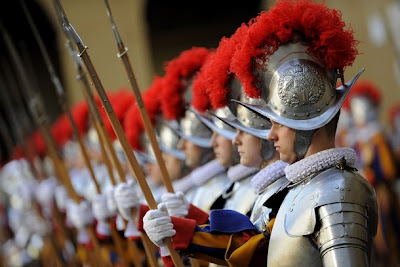 The Papal State of Vatican City is the smallest sovereign nation in the world and it is protected by the world's smallest army; the Papal Swiss Guard or, as they are officially titled, The Pontifical Helvetian Cohort. Founded in 1506 they are the longest serving active duty military unit in the world and are charged with guarding the Vatican and the immediate protection of the person of the Pope. Some might view the Papal Swiss Guard in their Renaissance uniforms and armed with halberds as chocolate box soldiers, purely ceremonial, intended to simply add color to grand papal ceremonies. Do not be fooled! The Swiss Guards are a highly trained and extremely motivated elite corps of soldiers who have seen combat more often than one might think. Recruitment standards are extremely high, one must be a Swiss citizen, of a certain age and certain height, of good character and a devout Catholic. Hours are long, the duties are hard and the pay is low; conditions which ensure only the truly committed will volunteer. For many service runs in the family and a number of the guardsmen serving today are descendants of the original Swiss mercenaries first hired by the "Warrior Pope" Julius II centuries ago.

Their greatest moment of military sacrifice (which has become their unit holiday and the day new guardsmen are sworn in) was on May 6, 1527 when 147 of 189 Swiss Guards fought to the death defending Pope Clement VII from invading imperial troops during the infamous Sack of Rome. Their sacrifice allowed the 40 remaining guards to safely escort the Pope to Castel Sant'Angelo. The modern Swiss Guard is a highly trained, elite fighting force. All must have gone through extrensive training with the Swiss Army and after being accepted into the guard they are trained in marksmanship, crowd control and hand-to-hand combat. Their halberds might be their most visible weapons but they have a respectable modern arsenal as well with the latest firearms kept out of sight but close at hand in case of emergencies. Plain-clothes officers of the Guard are around the Pope constantly to guard against assassination attempts and every guardsmen must swear an oath to defend the Pontiff even to the sacrifice of his own life.

In the old days of Renaissance Italy when the Popes often had to fight to maintain their independence from secular powers the Swiss Guards were the hardcore of their armies and the Guard has seen formal battle on occasions ranging from the Napoleonic invasion of the Papal States to the wars for the unification of Italy. Recruited from the German-speaking part of Switzerland this language barrier was once maintained to ensure that clerics in the Vatican could speak freely in their presence without fear of delicate information being passed along. Today, however, guards are immediately taught Italian and most speak a wide variety of languages so as to be able to help tourists visiting Vatican City. The Guard is very proud of the fact that despite many attacks, invasions and assassination attempts (sadly more common now than in centuries past) no Pope under their protection has been killed in all of their 500 years of service.
Posted by MadMonarchist at 1:26 AM