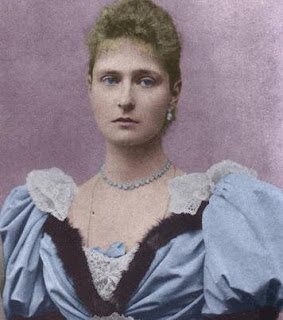 Czarina Alexandra Feodorovna could not, in practical terms, be considered a very successful royal consort, yet this is only because of the injustice of her popular image. She was, in fact, an amazing woman who was good and gentle, yet strong and courageous. There was no more devoted wife and mother in the world than Alexandra and although in secular terms she might not be regarded as a success, her life is sufficiently inspirational for her to be regarded as a saint by the Russian Orthodox Church today.

Born a Hessian princess in Darmstadt and a granddaughter of Queen Victoria of Britain she married the Czar Nicholas II of Russia in 1894 and became Czarina on that day (Alexander III had died during their engagement). Unlike other royal matches Nicholas and Alexandra loved each other intensely and remained so for the rest of their lives. Alexandra had to give up her Lutheran faith in favor of Russian Orthodoxy with her marriage but it was no mere conversion of convenience as she became a most devout and zealous Orthodox Christian. Her love of God ran as deep as her love for her husband and despite the anti-German prejudice of many in Russia she loved her new homeland and her Russian people as well.

She gave Nicholas II 5 children, 4 daughters and 1 son but despite her best efforts she remained unpopular with many in Russia, mostly owing to her German origins as it is clear there is nothing she could do to please those who railed against her, there was no act of goodwill or charity which they could not twist to cast her in a negative light. She retreated into her own little world with her family where she was totally devoted to her husband and children and as a result they were an extremely close-knit and loving family. Sadly, her son Alexei was afflicted with hemophilia and it was this that led to her poisonous association with Rasputin who inexplicably seemed able to heal the boy and as a result, no matter how horrid the lurid tales were of the man the Czarina would never believe it. He helped her son and that was all that mattered to her. God and family were first and foremost in all that she did and her life revolved around those twin pillars. 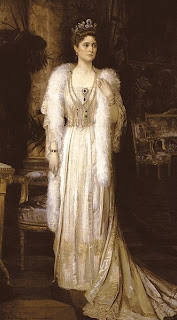 Things became even worse for her during World War I with the rise of more anti-German prejudice which was pointed at Alexandra. As usual, it was a complete injustice as the German Kaiser Wilhelm II was one of the few people Alexandra truly despised. Nonetheless, she did her best to ignore the criticism and work to support her husband and the war effort but it was all to no avail against the horrific forces of the revolution that swept away the ancient Romanov monarchy in 1917. Everyone knows the sad story, how the Czar was forced to abdicate rather than risk the break up of his family, how they were held in cruel captivity by the communists and finally taken to Ekaterinburg and kept under arrest and constantly harassed and tormented by the Red guards. Alexandra spent most of her time in a wheelchair, reading her Bible. On July 17, 1918 on direct orders from the dictator Vladimir Lenin himself, Czarina Alexandra and her entire family were shot to death in the basement of Ekatrinburg for no other "crime" than being Romanovs. Eventually they were all declared martyrs and saints by the Orthodox Church and Russia descended into a nightmare of Bolshevik tyranny, taking much of the world with it in the process.
Posted by MadMonarchist at 1:11 AM