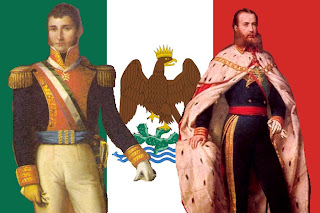 A great many monarchists around the world are, thankfully, aware of the tragic history of monarchy in Mexico embodied in the two gallant emperors; Augustin and Maximilian. However, not too many are aware of what happened to the cause of the Mexican monarchy in between the reigns of these two men or what happened to the monarchist cause after the atrocious execution of Emperor Maximilian. In Mexico, since the time of Spanish colonial rule, there had been quite a glittering local aristocracy. Many of these naturally supported the monarchy, and during his short reign Emperor Agustin created new titles of nobility, but support was not universal with many looking out for their own survival in the tumult that came with the fall of the first empire. When Emperor Agustin was executed the natural focus shifted to his son and heir the Prince Imperial Agustin Jeronimo.

He led a very diverse and interesting life, not always the sort one would expect of the heir to an imperial throne. While in exile he fought alongside Simon Bolivar in the War of Colombian Independence. After returning to Mexico he defended the republic during the war with the United States, leading the Celaya Battalion and calling upon the memory of his late father as the ‘Father of Independence’. He later served the Mexican republic in the civil sphere as an attaché to the Mexican legation in London. Showing his deep devotion to the Catholic Church that the Iturbide dynasty was known for he also served a tour a duty with the Papal army in Italy. He was not involved in the French intervention or the creation of the Second Mexican Empire of Maximilian but he did approve of the Hapsburg adoption of two of his nephews to serve as the heirs of the childless Maximilian. He died in New York, unmarried and with no heirs in 1866 and was buried in Philadelphia as was his mother Empress Ana Maria.

In the intervening years chaos prevailed in Mexico with the occasional president coming to power who was more favorably inclined toward the monarchist position though never actually willing to surrender power themselves in favor of a monarchist option. General Anastasio Bustamante had been a personal friend of Emperor Agustin I and he served as President of Mexico three times. He never took any steps to reestablish the monarchy but did take some tentative steps to restoring the image of the first Emperor as “Father of Independence”. When he died his ashes were buried alongside the martyred monarch. However, during the years between the two empires the one man who dominated Mexican politics more than any other was the shifty, vain and ambitious General Antonio Lopez de Santa Anna. Throughout his dramatic and colorful life he seemed to have been on every side of every issue at one point or another, supporting and betraying every faction.

Santa Anna had originally led the coup that brought down Emperor Agustin in the first place but later on, just as he at times posed as a liberal populist, he also took on more monarchial styles. He restored the Imperial Order of Our Lady of Guadalupe, even at one point taking to styling himself as “His Serene Highness”. An open admirer of Napoleon (who gloried in being referred to as the “Napoleon of the West”) some thought he harbored ambitions of making himself Emperor. That never happened but it was Santa Anna who first sent the staunch conservative Jose Maria Gutierrez d’Estrada to canvas the courts of Europe in search of a suitable Mexican monarch -a campaign the ardent reactionary continued even after Santa Anna had fallen from power yet again. This man would ultimately be a key player in the Mexican expatriate community in Europe that would bring Maximilian to Mexico.

It was the marriage of convenience between the monarchist expatriates in Europe (for the most part) and the conservative clerical party in Mexico (led finally by President Miguel Miramon) that came together in support of the French intervention to create the Second Mexican Empire. As most know, unable to have children of his own, Emperor Maximilian adopted two grandsons of Emperor Agustin as his heirs; Prince Agustin de Iturbide y Green and Prince Salvador de Iturbide y de Marzan. Agustin was named heir to the throne, usually titled Prince of Iturbide, and had the monarchy survived, upon the death of Maximilian he would have become Emperor Agustin II. That not being the case his natural family took to him to England and later he spent most of his youth in the United States. After his graduation from Georgetown he renounced his titles and claim to the Mexican throne, returned to Mexico and pledged his allegiance to the republic, serving for a time as an officer in the Mexican army.

This was during the dictatorship of General Porfirio Diaz, one of the most famous enemies of Imperial Mexico. Obviously, Mexican monarchists had not fared well since the fall of the empire, some fled to south Texas, some to Europe and others kept low and silent. However, there was a slow return to boldness and although the regime of General Diaz has often been termed as one favoring the elites to gain legitimacy, in most cases these were not the true aristocrats of Mexico but more like a post-revolutionary nouveaux riche. The old aristocratic families and lingering monarchists got in touch with Prince Agustin and prevailed upon him to come out publicly in opposition to the Diaz dictatorship in 1890. This action (not unexpectedly as he was an army officer at the time) led to his being arrested, brought before a court martial and being put in prison for 14 months for sedition.

After his release he went into exile again in the United States where, for a time, he suffered a nervous breakdown due to a paranoid fear of being assassinated (rather like his adopted mother Empress Carlota). Yet, he recovered, worked as a translator while living in a monastery and eventually teaching at Georgetown. He died in 1925 and was buried in Philadelphia. His cousin, Prince Salvador, then inherited the imperial claim to the throne of Mexico. Empress Carlota had sent him to safety in Paris after his adoption and he lived there until moving to Hungary in 1867. After the death of his adopted parents Emperor Francis Joseph of Austria granted him a pension though despite repeated requests he never increased the amount. He married into the Hungarian nobility and later moved to Venice where he became close friends to the Carlist heir to the Spanish throne. He died while visiting Corsica of an appendicitis.

In Mexico itself the monarchist cause was virtually wiped out but a loyal few have always kept the light burning. They cannot be totally dismissed given the amount of attention the republican government paid to them. When the Imperial Austrian government paid for the construction of a special chapel, dedicated in 1901, on the spot where Emperor Maximilian and his two top generals were shot the republican government quickly erected a massive monument to Benito Jaurez, the man who ordered the executions, directly in front of it (one wonders if they would have allowed the chapel to be built at all if that had not been planned all along). Well into the 20th Century Mexican monarchists would make an annual pilgrimage to the Church of La Profesa to hear mass for the repose of the soul of Emperor Maximilian and each time there would be agents from the Ministry of the Interior present to keep an eye on them.

However, the monarchist community, especially as the years drew closer to the present, suffered from the complete absence of the heirs to their throne with no connection to those who had inherited the imperial title. The only monarchy with a history in Mexico to cause a stir was that of the Kingdom of Spain and when King Juan Carlos and Queen Sofia visited Mexico for the first time in 1978 monarchists and aristocratic families fought over who would be given precedence at formal events and receptions. Some have even attempted to gain titles of nobility from Spain but have been stopped by the law. However, for all those welcoming the Spanish monarchs, there were more who held protests each time they came to the country. In the same way many cried colonialism when Spain began to invest in Mexico only to cry betrayal when Spain stopped investing in Latin America to become a member of the European Union.

Monarchists loyal to the empires still exist in Mexico but they are not well organized, few and far between. Soap operas, novels, plays and so on abound about the second empire period in particular but the “politically correct” view and that taught in the schools is still one of hostility to the monarchist position. Websites appear from time to time devoted to the subject, but most soon vanish or stop being updated. The distant heirs of Maximilian have shown no interest in visiting Mexico or speaking about their imperial heritage. Maximilian remains despised by the majority though Carlota is sometimes treated with more sympathy. It also often seems that the only people to celebrate the Emperor Iturbide are the “white nationalist” fringe who sometimes hold marches waving neo-Nazi banners and carrying portraits of the first Mexican Emperor. However, though being hampered by being few in number and fairly scattered, the monarchist community remains, keeping alive the glorious vision of a grand and prosperous empire for Mexico that Agustin and Maximilian tried to bring to fruition.
Posted by MadMonarchist at 12:43 AM