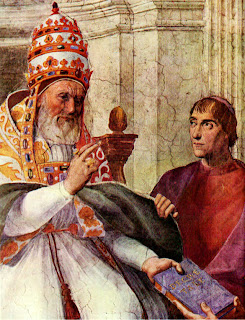 The “Renaissance Papacy” is not often fondly remembered. I have, however, never been among the critics of the ‘Renaissance Popes’, many of whom were far from saintly but just as often were quite impressive monarchs; able administrators, diplomats, statesmen and men of great culture. They had their moral failings often enough but they at least did not try to deny the sinfulness of their actions or re-write the rules of morality to suit their own taste as many today. One of my favorites, who in many ways best embodied the “Renaissance Man” of the era was Pope Julius II, often known as “the Warrior Pope” or “Julius the Terrible” -though it should be pointed out that back then the word ‘terrible’ was used more like ‘awesome’ would be today. Like the stereotypical “Renaissance Man” Julius II was a man who could speak expertly on religion, politics, warfare, art, love and life.

He was born December 5, 1453 as Giuliano della Rovere. Originally from a humble background, as was common at that time, he came up in the world by virtue of having Pope Sixtus IV as an uncle. He had entered the Franciscan order and was given the red hat by Sixtus IV when he was 18. He served as a legate for his uncle but fell into disfavor with the election of Pope Alexander VI -the two were bitter enemies. However, after the 27-day papacy of the short-lived Pius III it was Giuliano Cardinal della Rovere who was elected Supreme Pontiff after a conclave that lasted only a few hours. In a break with tradition the new Pope kept his given name and was known as Pope Julius II. His reign would be dominated by trying to undo the political changes of Alexander VI, defending the Papacy from secular control and building up and embellishing the Eternal City of Rome.

Pope Julius II faced these challenges head-on. He strapped on his armor, grabbed his sword, mounted his war horse and rode off to battle with a train of grumbling courtiers following behind him. A skilled and tenacious warrior, who had no problem living rough in the field with his troops, Pope Julius II defeated Cesare Borgia (the illegitimate son of Alexander VI) and drove him out of Italy, regained the cities and provinces previously lost to Rome, defeated Venice and then joined them in an alliance with Spain against the encroaching power of France. He dreamed of forging a united Italy under Papal direction, which was not to be, but the “Holy League” he formed was successful in defeating the French and driving them out of Italy.

These military campaigns cost a great deal, and the Church had been in pretty poor financial shape when Julius II came to the Throne of Peter. Pope Julius did all he could to save money and raise money in any way possible, some methods were rather unsavory and would be condemned later, such as selling indulgences, but in the end Julius II was one of those rare popes of the period who left the Church treasury full when he had found it empty. He also managed this while being a great patron of the arts, employing some of the most famous names in the Italian Renaissance. All could not be listed here, but he employed Bramante in designing St Peter’s Basilica and the Belvedere courtyard, he employed Raphael in decorating the papal apartments and most famously he commissioned Michelangelo to paint the ceiling of the Sistine Chapel (which had been built by his uncle).

Pope Julius II died on February 21, 1513 after calling the 18th General Council of the Church. Although he had the faults of other “Renaissance Popes” such as selling indulgences and admitting he fathered an illegitimate daughter earlier in his life, Pope Julius II was a great success overall, securing the independence and safety of the Church, removing the threat of foreign domination, putting the Church on safer financial ground and greatly beautifying the city of Rome.
Posted by MadMonarchist at 1:01 AM