How About a Little Intolerance? 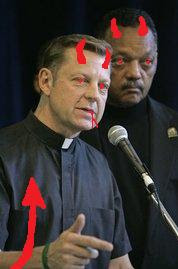 Controversial Catholic priest Father Michael Pfleger was recently honored with an award from the Archdiocese of Chicago for his work on behalf of minorities and race relations. That struck me as rather odd considering that, from what I've seen of the man, he seems to engage mostly in stirring up racial hatred rather than fostering peace between the races. He was also recently honored at an event alongside Protestant Pastor Jeremiah Wright (you know, the anti-Semitic G**damn America guy) and Nation of Islam leader Louis Farrakhan (the group that says non-Black races are "less evolved", that Blacks are the original and 'pure' human beings and that Whites are inferior). Pfleger was also once arrested alongside Jesse Jackson (shown above), another religious leader and racial activist who had to 'take a break' for a while when it was found he had cheated on his wife, fathered an illegitimate daughter and filched money from his followers to pay for them, while protesting gun laws in Chicago.

All of that would be enough for me to write-off Father Pfleger from the status of a genuine religious leader but, hey, the Cardinal Archbishop of Chicago must see things differently. Recently however, on Divine Mercy Sunday, Father Pfleger openly called for women priests, women bishops and women cardinals -something which clearly puts him at odds with the official teaching of the Catholic Church. Many Christians would see nothing wrong with that, but Pfleger is a *Catholic* priest and the Catholic Church is against such a thing and all clerics are supposed to take a vow of obedience to the Church and their religious superiors. So, my question is, why does Pfleger still have a job? Given all the Catholic Church has gone through lately I'm really begining to wonder if there is some kind of secretive trade union for priests that makes it near impossible to fire them. I have always been told that this was one of the benefits of having a hierarchy. Well, it doesn't seem to be doing much good lately. Has, perhaps, the culture of "tolerance" gotten out of hand? It seems simple enough to me -if a priest does something wicked you get rid of him and put in someone else. If a priest opposes the Church you get rid of him and put in someone else. If the bishop won't do it -here's an idea- get rid of the bishop and put in someone else. But then, what do I know? I'm just a Mad Monarchist mourning the crumbling of religion and the sense of the sacred around the world...
Posted by MadMonarchist at 2:56 AM