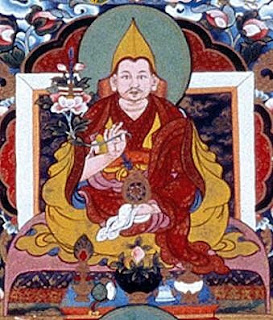 The Great Fifth, as he is known in history, Lobsang Gyatso was born as Kunga Nyingpo in 1617 in Lhoka Chingwar Taktse, south of Lhasa, into a very old and noble Tibetan family. He was discovered by Sonam Choephel, chief attendant of the Fourth Dalai Lama as the reincarnation of the late ruler. He passed the traditional tests but his presence was kept secret owing to the political turmoil embroiling Tibet at the time. Once this passed he was taken to Drepung Monastery and ordained as a Buddhist monk by Lobsang Chogyal, the Third Panchen Lama, and given the name Lobsang Gyatso. Peace had come to Tibet thanks to the intervention of Gushir Khan, a Khoshut Prince of the Oirat Mongols whose intervention had been requested by the ruling regent.

In 1642 Lobsang Gyatso was formally enthroned as ‘the Buddha of Compassion, the Wish-Fulfilling Jewel, the Fifth Dalai Lama of Tibet’. In 1645 he began the process of constructing the Potala Palace on the Red Hill in Lhasa. One of the most significant political meetings in East Asian history occurred in 1649 when the Dalai Lama was invited to Peking by the Great Qing Emperor Shunzhi. The Emperor sent 3,000 Manchu cavalry to the border to escort the Dalai Lama, traveled in person to meet him at Kothor and then journeyed on to Peking where the Tibetan monarch was housed in the Yellow Palace which the Emperor had built especially for the occasion. Both leaders treated each other with great respect and the Qing Emperor officially conferred on the Tibetan ruler the title, “Dalai Lama, Overseer of the Buddhist Faith on Earth Under the Great Benevolent Self-subsisting Buddha of the Western Paradise”. As a result of this meeting there was a Buddhist revival throughout the Qing Empire and all successive Dalai Lamas were regarded as the highest spiritual authorities by all the Manchu emperors. 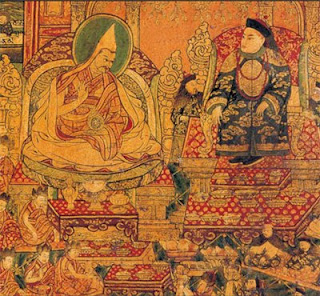 After about two months the Dalai Lama returned to Tibet in 1653. In the years that followed the Khan, prime minister, Emperor and Panchen Lama all died, bringing in a whole new leadership. The Fifth Dalai Lama, being the only constant amongst all these changes, greatly increased his authority, becoming the first Dalai Lama to effectively rule Tibet both temporally and spiritually. He made Lhasa the capital city and was an accomplished scholar and author writing a number of books and great pieces of poetry. He established systems to educate secular officials and monks and insisted that they learn Mongolian, Sanskrit, astrology, poetry and administration. He was extremely well respected as a man of wisdom far beyond the borders of Tibet. He died in 1682 at the age of 65 but because he was such a colossal figure, and the threat of instability still existed, his death was kept a closely guarded secret for quite a few years afterward so reliant were the people and international stability on his presence. For his strong leadership, wisdom in diplomacy, politics as well as the Buddhist religion he became known to Tibetans as the Great Fifth.
Posted by MadMonarchist at 12:19 AM