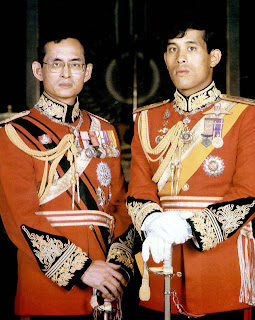 The news media is now reporting that Thai Prime Minister Abhisit Vejjajiva has declared a state of emergency in Bangkok after the red shirts of the criminal former PM Thaksin Shinawatra forced their way into the grounds of the Thai parliament. This is the fourth time in the last two years that such an emergency has been declared. In the old days this would be about the time for the revered Thai monarch, HM King Bhumibol Adulyadej, to step in, summon both sides to an audience and make peace. However, with the health of the aged monarch still extremely frail that is no longer a possibility and rumors are thick that a potential coup may be in the making as Shinawatra's red shirts might decide to take advantage of the crisis, at the time of the King's death, to abolish the monarchy and restore their own leader to power.

One of the issues which gives them hope (and these types of rumors legs) is the relative unpopularity of HRH Crown Prince Vajiralongkorn about whom many people have doubts due to past problematic behavior. What is ironic is that one of the things the Crown Prince had been criticized for in the past was his alleged business dealings with Thaksin Shinawatra. How much of the rumors are true is hard to say but despite best efforts it seems clear that there are doubts about the abilities of the Crown Prince and few would deny that it would be impossible for anyone to fill the shoes of King Bhumibol for whom public devotion and reverence is extreme to an extent not seen probably since the reign of King Chulalongkorn the Great. My only hope is that his extensive past military service will allow the Crown Prince to have their full support when the sad (and hopefully far off) death of the King does happen which will allow him to crush the red shirts once for all; which would certainly be possible if they were to attempt such a radical, revolutionary effort. Time will tell...
Posted by MadMonarchist at 3:20 PM