Happy Birthday to Her Majesty! 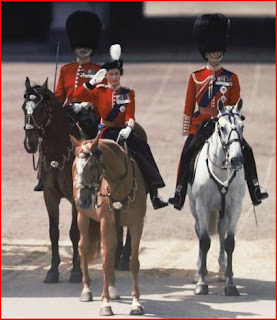 Today Her Majesty Queen Elizabeth II of the United Kingdom and her other Commonwealths celebrates her 84th birthday. It is unfortunate that her reign had to coincide with the continued downfall of the British Empire, however, the Queen herself has been the great tower of strength amidst all the turmoil and the decline in British power and influence around the world. She has faced a number of difficult situations as monarch and personally but she has survived them all and by her character, her devotion to duty and the matchless way she has continued to symbolize British tradition and represent what is best of British history she has single-handedly been the death of republicanism on the island of Britain with even the most dastardly republican traitors being forced to admit that while Elizabeth II is Queen their cause is hopeless. Such is all the more reason for the Mad Monarchist and all others to wish Her Majesty a happy birthday with many, many more to come and to join all in a hearty shout of GOD SAVE THE QUEEN!