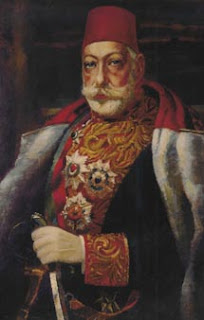 Mehmed V Reshad was the 35th Sultan of the Ottoman Empire. He was born on November 2, 1844 in the Topkapi Palace in Constantinople to Sultan Abdulmecid I and his Caucasian wife Valide Sultan Gulcemal. As was customary in the Ottoman Empire he was restricted to the palace harem for 30 years, 9 of those years spent in solitary confinement. He spent his time in the gilded cage studying traditional Persian style poetry and thus became known as an exceptional poet himself and an expert on Persian literature. However, his life of seclusion and literary study came to an end in 1909 when his brother, Sultan Abdul Hamid II was forced to abdicate by the “Young Turks” who had taken power.

On April 27, 1909 Mehmed Reshad was installed as Mehmed V, Great Sultan and Padishah of the Ottoman Empire and Caliph of Islam etc. However, with the nationalist “Young Turks” faction still holding the real power he was to remain a relative figurehead when it came to the actual decision making. One of the items on the agenda was an effort to revitalize the “Sick Man of Europe” through infrastructure and military modernizations accomplished largely through closer relations with the German Empire. At the time, many Turks viewed the Germans as their only possible ally to counter the threats they faced from Russia to the north and the British to the south and west. Ultimately this led to the event that was to dominate the reign of Sultan Mehmed V which was the First World War.

Described as a kind and gentle man, Mehmed V was left to mostly ceremonial duties while policy was directed by the leaders of the Committee of Union and Progress. A particularly dominant figure was the “Young Turk” Enver Pasha, an architect of the alliance with Germany who even wore an upturned moustache in the style of the Kaiser. In 1911 the Committee prevailed upon the Sultan to go on a tour of Thrace and Albania to encourage better relations between Constantinople and the Ottoman territories in Europe. However, in the wars that followed almost all of these territories were lost as was Tripoli following a lost war with the Kingdom of Italy. These setbacks only served to strengthen the hand of those who advocated a military alliance with Germany to win back territories previously lost to Britain and Russia.

The Ottoman and German Empires had signed a secret treaty on August 2, 1914 (which Enver Pasha put together) and on November 2, 1914 the Middle East was at war. To the surprise of many the Turks proved to be quite rugged and tenacious fighters, inflicting a number of defeats on the British. However, early on it was easy to see that the cards were stacked against the Ottoman Empire. How involved Sultan Mehmed V was in all of this is hard to say given his position of nominally great but effectively very little power. Like most of the monarchs in Europe Mehmed V went along with the war reluctantly, in fact almost against his will; he had wanted the Empire to remain non-belligerent.

However, there was one way, it was decided, that the Sultan could be of great value to the war effort and that was in his capacity as Caliph of Islam. The British monarch actually had more Muslim subjects than any other monarch on earth and, it was reasoned, if these populations could be inspired to rise up against the British out of Islamic solidarity Britain would surely be defeated. So it was that on November 11, 1914 Sultan Mehmed V, as Caliph of Islam, formally declared a jihad, a holy war, against the Allies. It was to be the last time a jihad was legitimately declared by someone with the authority to do so.

Unfortunately for the Turks, there was little response from the wider Muslim world. Some Muslim soldiers of the British Indian army in Singapore did mutiny at the thought of fighting their brothers in the faith but on the whole the Sultan was ignored or what minor outbreaks of violence occurred were easily dealt with by the British with no real effect on their war effort. The Germans were very disappointed having expected more from the many Muslims living in French and British colonies across Africa and Asia. In fact, some Muslims within the Ottoman Empire took up arms alongside the British against their Ottoman rulers such as in the Arab Revolt in 1916.

During the war the Ottoman Empire was dominated by Enver Pasha, Talat Pasha and Kemal Pasha while Sultan Mehmed V was left with mostly ceremonial duties such as hosting a visit by Kaiser Wilhelm II in Constantinople on October 15, 1917. The Kaiser made him a Field Marshal in the Prussian and later Imperial German armies, an honor returned by the Sultan. By that time of course the war was going very much against the Turks but Sultan Mehmed V would not live to see the final, disastrous end. He died on July 3, 1918 in Constantinople at the age of 73. He was succeeded by his brother Mehmed VI as Sultan but within 6 months the war would be over and Constantinople itself would be under Allied occupation with the Ottoman Empire carved up into mandates under France and Britain.
Posted by MadMonarchist at 1:16 AM