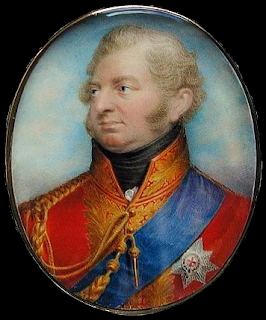 HRH Prince Frederick Augustus was born on August 16, 1763, the second child of Their Majesties King George III and Queen Charlotte of Great Britain and Ireland. When he was only 6 months old King George III had young Frederick elected Prince-Bishop of Osnabruck in Germany, making him the youngest bishop on record to this day. Early on his father decided that Prince Frederick would have a military career and sent him to stay in his Hanoverian possessions where he lived a rather dissolute life while observing the tactics and strategies of the nearby Prussian and Austrian armies. He also went to university while in Germany and in 1782 was appointed colonel of the 2nd Horse Grenadier (Life) Guards and in 1784 was promoted to major general and colonel of the elite Coldstream Guards.

That same year Prince Frederick was given a place on the Privy Council and given the title of Duke of York and Albany and Earl of Ulster. In 1787 there were rumors that the American rebels planned to make the Duke the King of the United States but they were trumped up rumors and nothing more. The Duke returned to Britain as planned and took his seat in the House of Lords. He ran afoul of his brother the Prince of Wales over the regency crisis but was soon put out of the way when given command of the British army sent to secure the Low Countries in 1793. The Duke landed his forces and soon besieged Dunkirk and was supposed to be working in cooperation with the Austrians in what is now Belgium. However, the French had recently adopted the leveé en masse which brought a horde of untrained but zealous French troops to his front.

So, the “Grand Old Duke of York” (as he came to be known) had his butt handed to him and had to vamoose á Britannia. King George III rewarded him by promoting him to commander-in-chief of the British army (succeeding methodical and coldly effective Lord Amherst). In 1799 the Duke of York took to the field again with the Anglo-Russian invasion of the Netherlands (Batavian Republic). However, once again the Duke was thwarted by the Franco-Dutch forces and was forced to return home with little more than the capture of the ice-bound Dutch fleet to show for his effort. In short, the Duke of York had pretty much been a failure as a battlefield commander, however, that did not mean he was an ineffective general.

The Duke of York had married his cousin, the Prussian Princess Frederica Charlotte, but the two never had any children and the stories of his mistresses eventually got him into some trouble when it seemed that a mistress was being bribed to influence his appointments. However, the Duke weathered that storm and returned to his command and proved to be a very effective “desk general”. This is most often used as a derogatory term but, any army does need desk generals as well as fighting ones. The Duke of York was a very capable military administrator and he enacted a number of reforms in organization, training and logistics that proved invaluable in the coming campaigns against Napoleonic France. His job may not has been as glorious as that of the Duke of Wellington, but in all fairness the Duke of York deserves a fair share of the credit for building and supplying the military forces that Wellington led to victory. The Duke of York died in 1827 as a result of health problems brought on by his rather overindulgent lifestyle.
Posted by MadMonarchist at 7:07 AM