The Birthday of Prince Bismarck 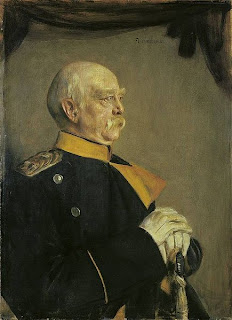 It was on this day in 1815 that Prince Otto von Bismarck, the primary force behind the unification of Germany under Prussia was born. In recognition of that, we have a list of some of the more memorable phrases of the "Iron Chancellor":

Laws are like sausages. It is better not to see them being made.

Preventative war is like committing suicide out of fear of death.

Universal suffrage is like the government of a house by its nursery.

I have seen three kaisers in their nakedness and the sight was not inspiring.

He who has his thumb on the purse has the power.

Let us lift Germany, so to speak, into the saddle. It will certainly be able to ride.

Politics is not an exact science, it is the art of the impossible.

A conquering army on the border will not be stopped by eloquence.

Not by speeches and votes of the majority, are the great questions of the time decided — that was the error of 1848 and 1849 — but by iron and blood.
Posted by MadMonarchist at 12:27 AM