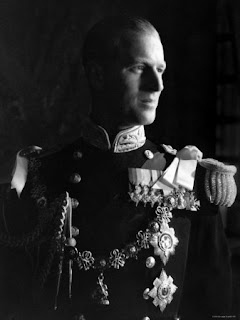 HRH Prince Philip, Duke of Edinburgh, consort to HM Queen Elizabeth II of the UK etc has the distinction of being the oldest and longest serving spouse to any British monarch as well as being one of my personal favorites. Prince Philip was born on the Greek island of Corfu on June 10, 1921 to Prince Andrew of Greece and Denmark and Princess Alice of Battenberg. When his uncle, King Constantine I of Greece, was forced to abdicate the newly imposed military government forced Prince Andrew and his family to leave Greece and move to Paris.

Prince Philip was educated in France and later Great Britain under the guidance of his uncle Lord Louis, Earl Mountbatten. His sisters all married into German families, his mother fell prey to mental illness and was placed in an asylum and his father moved to Monaco. Philip went to school in Germany as well for a time but later moved back to Great Britain and in 1939 joined the Royal Navy, graduating from Dartmouth the following year. During World War II he saw extensive service in the Indian Ocean and the Mediterranean where he earned promotion and a number of decorations before seeing out the end of the conflict with the British Pacific Fleet.

It was during these years that Earl Mountbatten introduced him to Princess Elizabeth. The two fell for each other quickly and began corresponding during their time apart. Prince Philip asked to marry the Princess in 1946 but HM King George VI had them wait a year and if, after that time, they still wished to the couple would have his blessing. In July of 1947 the engagement was announced and Prince Philip renounced his Greek and Danish titles, converted from Greek Orthodoxy to Anglicanism and became a British subject with the surname Mountbatten. He was raised to royal status by King George VI the day before his wedding which took place on November 20, 1947. Prince Philip and his new bride were both made members of the Privy Council owing to worsening health of the King.

A son and heir was born to the couple in 1948, Prince Charles, followed in 1950 by the Princess Royal Anne. By this time Prince Philip had returned to naval service, working at the Admiralty and with the Mediterranean Fleet before being given command of the sloop-of-war HMS Magpie in 1950. In 1952 King George VI passed away and Princess Elizabeth became Queen Elizabeth II. Prince Philip attended her coronation but was not crowned with her as that is not done with male consorts in England. In the years that followed the British Royal Family grew with Prince Andrew being born in 1960 and Prince Edward in 1964.

Prince Philip has been recognized by the Queen herself and many others for being a source of strength and support to the monarch. He also has is critics and is often accused of being gaffe prone or making insensitive jokes. Supporters like myself see this as a refreshingly honest and good natured sense of humor and although there may be some who are critical of Prince Philip there are also some natives in the south Pacific who worship him as a god -so it all balances out I suppose. Prince Philip has spoken out about the nature of the monarchy as an institution of public service and he has certainly lived up to that ideal, undertaking more engagements than any other member of the Royal Family after his daughter Princess Royal Anne, despite his rather advanced age and some heart problems.

As far as royal consorts go, and it always seems to be a more difficult job for male consorts, one would be hard pressed to find one to surpass Prince Philip. He has been a loyal husband, a devoted father, hard working supporter of the British and Commonwealth people, a defender of the monarchy and a very kind and good natured man; old fashioned, dignified but able to put people at ease. Even though he is fast approaching the age of 89 he is still the hardest working man in the British monarchy. God bless him and God save the Duke of Edinburgh!
Posted by MadMonarchist at 12:13 AM