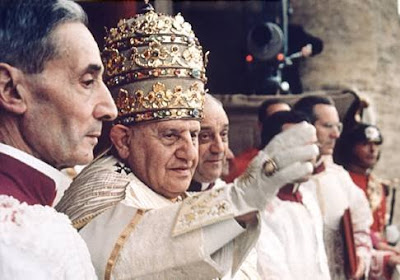 The man who would be Pope John XXIII was born Angelo Giuseppe Roncalli in the province of Bergamo in Italy on November 25, 1881. The first son in a family of 14, his father was simple sharecropper but the Roncalli family did have aristocratic ancestry. A kind and pious youth Angelo joined the Church and was ordained priest in 1904. During the First World War he was drafted into the Royal Italian Army, attaining the rank of sergeant, in which he served as a medic and a chaplain. After gaining some experience in Church administration Pope Benedict XV appointed him president of the Society for the Propagation of the Faith in 1921.

Father Roncalli began gaining extensive diplomatic experience when Pope Pius XI made him Apostolic Visitor to Bulgaria in 1925. It was also Pius XI who raised him to the rank of bishop. In the following years Bishop Roncalli carried out diplomatic missions to Turkey, Greece and France before being appointed Cardinal-Priest and Patriarch of Venice. In place of the Most Christian Kings it was French President Vincent Auriol who presented the new cardinal with his red hat at the Elysee Palace. In 1958 Pope Pius XII passed away and Angelo Cardinal Roncalli was chosen to succeed him, taking the name John XXIII. The Catholic world had been through so much with Pius XII that it seemed no one could replace him, yet John XXIII quickly won over his global flock and many outside of the Church as well.

Pius XII and John XXIII could not have been more different in their style and background. Pius XII had come from an old aristocratic family of the Roman Black Nobility, wealthy, genteel and well connected. When photographed he would always turn his head to gaze off into the distance and carried himself in a very detached, saintly and monarchial fashion. The poor farm boy John XXIII lacked the learning and illustrious lineage of his predecessor but he had the common touch. When photographed he would look right into the camera and smile, he referred to himself as “I” rather than “We” and had a very jolly and approachable style about him. Still, because of his age, most expected John XXIII to be a temporary pope (himself included) but he was to have a great impact on the Church.

This impact was, of course, his surprising call for a Second Vatican Council, which he obviously felt important but which he also kept his distance from. This has proven to be one of the most controversial and even divisive gatherings in the history of the Catholic Church. Overall one would be hard-pressed to explain what has improved because of it. In many cases the Council was used a way for liberals to get their foot in the door of the Church and the next thing you know the hippies have taken over and Catholics are holding hands at mass. Because of this Pope John XXIII has often come under attack by some ignorant folk who take him for some sort of revolutionary when nothing could be farther from the truth.

True enough, he had a more ‘common man’ style than previous popes but he was also the last pontiff to employ the full traditional style of papal ceremony including his traditional 5-hour long coronation. In regards to his opinion on politics he could not have been more clear, calling upon the memory of Pope Pius XI who had a great impact on him. In one of my favorite encyclicals (Mater Et Magistra) of John XXIII he writes, “Pope Pius XI further emphasized the fundamental opposition between Communism and Christianity, and made it clear that no Catholic could subscribe even to moderate Socialism. The reason is that Socialism is founded on a doctrine of human society which is bounded by time and takes no account of any objective other than that of material well-being. Since, therefore, it proposes a form of social organization which aims solely at production, it places too severe a restraint on human liberty, at the same time flouting the true notion of social authority”. God bless him I say.

Pope John XXIII would not live to see the Second Vatican Council concluded. He died on June 3, 1963 at the age of 81 and was later succeeded by Pope Paul VI. The popularity the warm and jovial pontiff earned continues to endure to this day and on September 3, 2000 he was beatified as Blessed John XXIII by Pope John Paul II.
Posted by MadMonarchist at 12:14 AM