Camarón Day and the French in Mexico

It was on this day in 1863 that the 3rd Company of the 1st French Foreign Legion Regiment fought its most famous and heroic battle at the Hacienda of Camarón (read more about the battle in this post). It is the official holiday of the Foreign Legion and a day to remember the courage of the foreign regiment; an occasion of great pride for France. Of course, in Mexico, the French are seen as the "bad guys" and in a few days Mexico (and even moreso the Mexican population of the U.S. these days) will celebrate the Mexican republican victory over the French at the battle of Puebla on the 5th of May. As has often been mentioned here, the "accepted version" of Mexican history in regard to the French intervention and the establishment of the empire is firmly cemented in place and not likely to be changed without a very, very long and difficult process of questioning, critical thinking and reeducation.

However, if the truth is to be served we must point out that there was more to the French intervention than the negative aspects that are so often harped about. It was not the first time, nor would it be the last, that good government (or at least better government) would follow in the footsteps of the Foreign Legion. It is no exaggeration, it is a matter of simple fact that the arrival of the French Imperial Army in Mexico brought with it benefits that many in Mexico had not known virtually since independence. In only a few short months and years French forces suppressed banditry, brought stability, improved the infrastructure, trade and communications throughout Mexico in all the areas under their control.

The French built the first railroad along the coast to move supplies and trade to the port of Veracruz. French engineers rebuilt and improved roads that had been in decay since the end of Spanish rule. They built new roads, new bridges and put up the first telegraph system in Mexico. Even more remarkable than this was that they kept it in operation; kept the lines up and protected them from republican raiders. Mexico had been plagued by bandits for so long they had become almost a part of the landscape, part of the popular culture and many of those who claimed to be fighting for the republican President Benito Juarez were simply bandits going about their usual business but wrapped in the republican flag as a cover of patriotism. The French smashed them and Mexican people in remote villages, for the first time in their lives for many of them, experienced life without the threat of roadside robbery and extortion.

Despite the popular perception in Mexico today, at the time many were supportive, appreciative and deeply grateful for the sacrifices of the French forces in their country. In fact, when the French began to constrict and pull out many Mexicans were thrown into a panic, knowing well that when they left the situation would revert to its normal state. One local village leader went to the closest French outpost and begged that just a small detachment of French troops be left behind. When he was told that this was impossible he asked if only a single French lieutenant could be posted to his village as simply the sight of the man in the blue tunic and red trousers would cause the bands of robbers in the countryside to avoid his village. That was the extent of the impact of the French Imperial forces and their benefits to the people and country of Mexico. 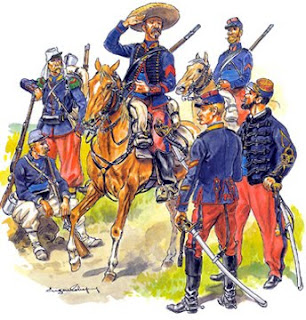 Posted by MadMonarchist at 1:16 AM