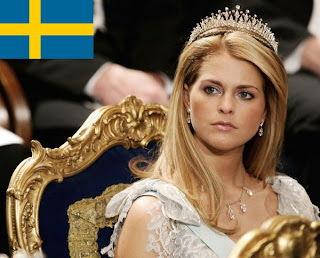 It has been made official. Princess Madeleine of Sweden and lawyer Jonas Bergstrom have broken off their engagement according to the palace. Rumors of an impending breakup have been swirling for some time; Princess Madeleine moved out of the couple's apartment, there were rumors of infidelity on Bergstrom's part and an admission that the wedding would not happen this year. However, only a few days ago the palace said the two were still an item and asked the media to leave it at that. However, once again, the tabloids seem to have been right as the engagement has been called off and the palace has said the two have gone their different ways. Hopefully the press will not make this difficult situation even worse and the Mad Monarchist wishes Princess Madeleine all the best and hopes she will find a husband worthy of her someday.
Posted by MadMonarchist at 2:57 PM