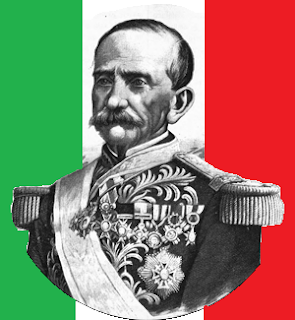 Jose Mariano de Salas was born on May 11, 1797 and joined the Royal Spanish Army in Mexico (then New Spain) in 1813 as a cadet in the Puebla Infantry Regiment and he saw his first action with the royalists putting down anti-Spanish rebels. Later he fought alongside Antonio Lopez de Santa Anna at the capture of Jalapa in Veracruz. In 1821, when General Agustin de Iturbide issued his Plan of Iguala calling for an independent Mexican Empire, Salas enthusiastically embraced the cause. During the rebellion that arose after the Plan of Montano was issued in 1827 he fought in defense of President Guadalupe Victoria and two years later he fought to repel the invasion of Spanish General Isidro Barradas at Tampico.

Through all of this Salas was becoming aware of how chaotic republican rule could be and like many he began to support the idea that it would take a strong-man to keep order. The most prominent candidate on-hand was General Santa Anna. In 1832 Salas was promoted to lieutenant colonel and he supported Santa Anna as President of Mexico. When Texas rose in rebellion against Santa Anna, Salas joined his Army of Operations in Texas to put down the rebels and was given command of the Permanente Jimenez Battalion. When Santa Anna attacked the Texan forces at the Alamo on March 6, 1836 Salas was second-in-command of the third assault column of about 400 men from the Jimenez, Matamoros and San Luis battalions under Colonel Jose Maria Romero that attacked the mission from the east. Salas later fought against the Texan forces of Colonel Fannin near Goliad and after the epic Mexican defeat at San Jacinto he helped cover the retreat of the army back to Matamoros.

A few years later, in 1840, Salas helped put down a mutiny at the National Palace and in 1844 he was exiled from Mexico for his continued loyalty and support of the recently-deposed dictator General Santa Anna. De Salas soon returned, however, and in a switch for him led an uprising in 1846 in Mexico City to restore the government regime that had favored states’ rights over centralized control. From August 5 to December 23, 1846 Salas was President of Mexico and he restored the states rights constitution of 1824 (the original republican constitution and ironically the one the Texans at the Alamo had been fighting for prior to the declaration of independence). He called Congress back into session and given his experience he knew that war was all but inevitable with the United States and he ordered the enlargement of the militia and the raising of addition war funds to prepare for this eventuality.

In December Salas handed the presidency over to his old chief General Santa Anna and the following year was promoted to General of Division. When war with the United States did come Salas was deputy commander of the northern army and he was taken prisoner by the Americans at the battle of Contreras on August 20, 1847. Ultimately, Mexico lost the war and following the peace agreement Salas was released and named military governor of the state of Queretaro. During the Reform Wars he briefly served as President of Mexico again, holding power until the return of the conservative leader Miguel Miramon. One Miramon returned Salas effectively acted as his vice-president and was the commander of the Mexico City garrison during the war.

All of this trouble had convinced many Mexicans that a monarchy was needed, one led by an impartial outsider with no ties to the existing power struggles. With the intervention of the French the opportunity for such a change presented itself. In the summer of 1863 a regency for the Mexican Empire and General Salas, General Juan Almonte and Archbishop Antonio de Labastida were chosen to hold power while a monarch was chosen. It was this triumvirate that sent the delegation to Miramar to offer the Mexican throne to Archduke Maximilian of Austria. The Archduke accepted and on June 12, 1864 Maximilian and Carlota entered Mexico City as Emperor and Empress. Emperor Maximilian made Jose Mariano de Salas one of his generals in the Imperial Mexican Army but, by that time, the veteran soldier was too old for service in the field. Salas died on December 24, 1867 after seeing his Emperor executed and the empire he had fought so long and hard for collapse and Mexico return to the political chaos of squabbling presidents and dictators.
Posted by MadMonarchist at 12:24 AM