Bring on the Pageantry! 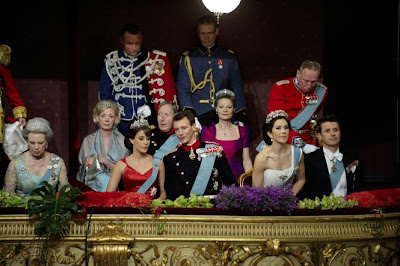 That's what I like to see -royal gatherings with someone in a hussar uniform! The pomp and pageantry has been on full display in Europe's oldest monarchy for the birthday celebrations of HM Queen Margrethe II of Denmark. Those attending include Crown Prince Frederick, Crown Princess Mary, Prince Joachim and Princess Mary (seen above), Crown Princess Mette-Marit of Norway, Crown Princess Victoria, fiance Daniel Westling and Prince Carl Philip of Sweden, Grand Duke Henri and Grand Duchess Maria Theresa of Luxembourg, Princess Benedikte of Denmark, Queen Anne-Marie of Greece, Princess Nathalie and fiance Alexander Johannsmann and a host of other political and society elites with more to arrive later all to pay their respects to the beloved Queen of Denmark for her 70th birthday.
Posted by MadMonarchist at 2:22 PM