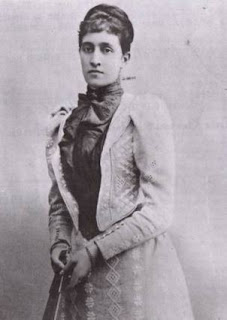 HRH Infanta Maria Ana of Portugal was born on July 13, 1861 at Schloss Bronnbach, the fifth daughter of HM King Miguel I of Portugal (who had previously been deposed) and Adelaide of Lowenstein-Wertheim-Rosenberg. Despite living in exile, mostly in Germany, the former Portuguese monarch saw to it that his daughters were raised as princesses, given the best that he was able to provide for them and did his utmost to see them married well.

Infanta Maria Ana was married to Hereditary Prince Guillaume of Luxembourg, son and heir of HRH Grand Duke Adolphe of Luxembourg, on June 21, 1893 at Schloss Fischhorn, Zell am See. Some eyebrows were raised at the prospect of a mixed marriage between the Protestant Guillaume and Catholic Maria Ana, however, as Luxembourg was a Catholic country Prince Guillaume had already decided that when he became Grand Duke his children would be raised Catholic so that the people and their royals could be of the same faith. After the marriage the Infanta adopted the French version of her name Marie Anne.

On November 17, 1905, with the passing of his father, the young prince became Grand Duke Guillaume IV of Luxembourg with Marie Anne as his consort. From 1894 to 1902 the couple had six daughters; Marie-Adelaide (who never married), Charlotte who married her cousin Prince Felix of Bourbon-Parma, Hilda Sophie who married Prince Adolph zu Schwarzenberg, Antoinette who married Crown Prince Rupprecht of Bavaria, Elizabeth Marie who married Prince Ludwig Philip of Thurn und Taxis and Sophie Caroline who married Prince Ernst Heinrich of Saxony.

During World War II the Grand Ducal Family of Luxembourg was forced to go into exile with the invasion of Nazi Germany. It was in New York City, New York that the Dowager Grand Duchess Marie Anne died on July 31, 1942.
Posted by MadMonarchist at 1:24 AM