Birth of the Second Mexican Empire 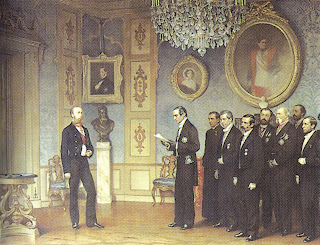 It was on this day in 1864 that HIRH Archduke Maximilian von Hapsburg was elected Emperor of Mexico. Ironically, it was almost exactly one year later, on April 9, 1865, that General Robert E. Lee surrendered his Confederate army in Virginia, effectively ending the American War Between the States. In many ways this surrender was the doom of Maximilian and his Mexican Empire as the United States was then able to bring her full attention to supporting the republicans in Mexico and threatening invasion if the French did not withdraw their forces.
Posted by MadMonarchist at 2:50 AM