Can the King Save Belgium? 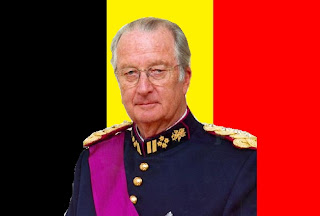 Once again, the news media is howling that the end may be at hand for the Kingdom of Belgium. Prime Minister Yves Leterme presented his letter of resignation to HM King Albert II after the Flemish party, Open VLD, left the coalition government leaving only French-speaking Walloon members and no Dutch-speaking Flemish representation. The break came after disputes involving the re-drawing of electoral boundaries around Brussels. So far, King Albert II has not accepted the resignation of the Prime Minister, fearing that giving up on the coalition could spell disaster during the current economic crisis and the upcoming EU-presidency for Belgium. The King of the Belgians has been working hard the last few days trying to convince the Flemish party to come to the government and for the two sides to work out a compromise. The Flemish have held out some hope but so far no agreement has been reached. The media was quick to pounce (yet again) saying that this could be the end of the Belgian monarchy, that the country does not "make sense" and that the will to exist seems to be gone.

All of that is frustrating enough, moreso since we have heard this same song and dance before every time there is a political stand-off. It does wear on the nerves but it also cannot be easily dismissed. The whole issue frankly baffles me. Europe would simply not be the same without the Kingdom of Belgium and it seems incredible to me that after a history longer than many other countries around today, after going through so many trials, tragedies and triumphs and so on that the Belgian people could be so divided as to 'give up' on their country. We can only hope that this disaster is avoided as it has been in the past and give some deserved credit to the King, both Albert II and his predecessors, who have done more than any others in keeping the country together throughout threats of "divorce" in the past.
Posted by MadMonarchist at 2:49 AM