The Face of the Foes in Thailand 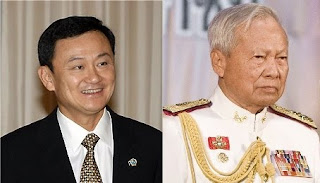 Due to the efforts of revolutionary agitators to spread confusion, it seems appropriate to be blunt about the two sides at odds in the current crisis in Thailand. Basically you have the red-shirted UDD on one side and the yellow-shirted PAD on the other. The reds are supporters of former populist PM Thaksin Shinawatra of the now-banned People's Power Party which ran on a typically vague platform of more social welfare programs and greater "democracy". More often they (and their current manifestations) have been known for what they are against; namely the royalist-dominated Thai military high command, the amount of influence of the King and aristocrats in government and of course the PAD which represents this. They have singled out Privy Council head Prem Tinsulanonda in what is widely regarded as a way to attack the King of Thailand without being subject to criminal prosecution.

General Prem, on the other hand, is widely known for his staunch support of the King and of royal rights and past royal programs. The yellow-shirted PAD whom the reds oppose is often accused of being "fascist" (by people in red shirts with "people's" and "democratic" in all their titles -go figure) since they include most of the traditional leaders of the country, aristocrats and the like, and have stated that they favor limits to absolute democracy (a good idea) in favor of a more careful selection process overseen by the monarch. The Reds naturally howl that if the changes favored by the PAD were put into effect most of the Parliament would end up being appointed by the King. Not surprisingly I see nothing frightening about that scenario. Toward this end the PAD founded the New Politics Party, essentially a new royalist party, to oppose the UDD and their allied red-shirted "For Thais Party" which also preaches populist socialism.

The UDD have been very adept at painting themselves as the righteous patriotic "good guys" but for anyone with any knowledge of southeast Asian politics or the situation in Thailand they cannot fool anyone. It is their leadership which is constantly arrested for defaming the Thai monarchy, it is they who adopt the revolutionary symbolism and use the traditional commie tactics of trying to incite the masses with promises of "democracy" and more government hand-outs while denouncing their enemies as "fascists" for favoring a greater role for the monarchy and the traditional authorities of the country. One side preaches a vague socialist populism, the other preaches royalism. For anyone from the monarchist camp it is no great problem deciding who the heroes and villains are in this unfolding drama. 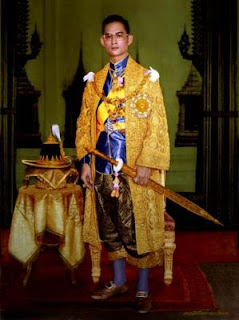