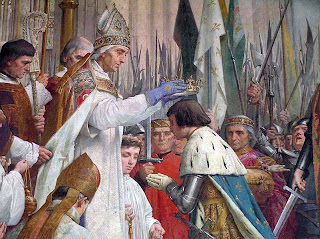 This being Easter it is as good a time as any to take a brief look at the relationship between monarchy and religion; in this case with a focus on Christianity. The ties between cross and crown are as old as the religion itself. It was as Christ the King that Jesus suffered death and the faith was confirmed by His ascension as King of Heaven. Christianity became acceptable due to the Edict of Milan granted by Emperor Constantine the Great who later became the first Christian Emperor of Rome. Later, Emperor Theodosius the Great made Christianity the official and exclusive religion of the Roman Empire, ushering in the era of Christendom.
From these beginnings there was always a very clear cooperative relationship between the imperial monarchy and Christianity. The earliest ecumenical councils were called, not by the Pope, but by the Emperor with the Pope validating them later. Even the papal title Pontifex Maximus or Supreme Pontiff was originally a title of the Roman Emperors which was passed to the Bishop of Rome by the Emperor Gratian. Being so far removed from the Roman Empire it may be hard for modern Christians to understand just how central the role of the Emperor was to the idea of a truly Christian society. This became especially pronounced with the shift in imperial power to the Eastern Roman Empire and even more so after the fall of the Western Roman Empire. In Constantinople the Emperor was recognized as the vicegerent of God on earth and the relationship between the Church and the monarchy was a very close on and would always continue to be so.
In the west the lack of such a relationship could not be endured and in 800 it was restored with the Holy Roman Empire when Pope St Leo III crowned Charlemagne in Rome on Christmas Day. Monarchs, east and west alike, were anointed with holy oils, dressed in clerical style garb and crowned in memory of Christ being crowned with thorns. The significance of this was so great that the monarchial coronation was often referred to as the eighth sacrament. This form of altar and throne relationship, continuing traditions from the Roman Empire, did come under attack with the start of the Protestant movement, however, Protestant Christianity also contained a very strong cooperation between cross and crown of a different sort. Protestantism would never have moved beyond its embryonic stage were it not for the Prince-Elector of Saxony, Frederick III, coming to the defense of Martin Luther and harboring him while he was in opposition to the Emperor.
Luther condemned rebellions and was particularly vociferous in his condemnation of the Peasants Revolt which was done in the name of Protestantism. He called for loyalty to the German princes, reminded his followers of the Biblical commands for obedience to Caesar in temporal matters and referenced the Divine Right of Kings. While other Protestant sects diverged from this view Lutheranism maintained the authority of the local royals. In time the Lutheran states of northern Europe all set up national churches under the leadership of the monarch which still survive today in Scandinavia. Protestantism also flourished in England with a unique style in which the monarch was exalted as ‘Supreme Head of the Church on earth’ and non-resistance to royal authority effectively became the bedrock principle of the Church of England as it was originally founded. It is also, to date, only in the British monarchy that the full, medieval style coronation ceremony is still performed with the monarch remaining head of the national Church of England in the Protestant fashion but also still retaining the title “Defender of the Faith” which was a title originally given to the English king by the Pope when the country was still Catholic.

“The character of Kings is sacred; their persons are inviolable; they are the anointed of the Lord, if not with sacred oil, at least by virtue of their office. Their power is broad---based upon the Will of God, and not on the shifting sands of the people's will...They will be spoken of with becoming reverence, instead of being in public estimation fitting butts for all foul tongues. It becomes a sacrilege to violate their persons, and every indignity offered to them in word or act, becomes an indignity offered to God Himself. It is this view of Kingly rule that alone can keep alive in a scoffing and licentious age the spirit of ancient loyalty, that spirit begotten of faith, combining in itself obedience, reverence, and love for the majesty of kings which was at once a bond of social union, an incentive to noble daring, and a salt to purify the heart from its grosser tendencies, preserving it from all that is mean, selfish, and contemptible.”
-- Archbishop John Healy of Tuam