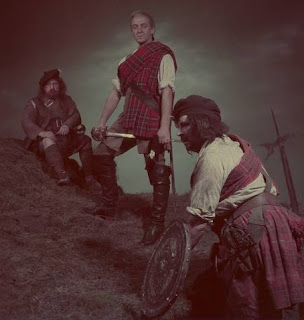 It was many years ago that I came across the movie “Bonnie Prince Charlie” starring David Niven in the title role. Unsuspecting innocent that I was, I thought, ‘what a great story for a movie, David Niven is a good actor, oh and look, Jack Hawkins is in it too and he’s been a lot of great movies, this must be a sure winner’. And as I bought it and walked out the store not one clerk was good enough to warn me that I had bought one of the most infamous stinkers in the history of British cinema (which is really saying something). I soon found out that “Bonnie Prince Charlie” is a ponderous, preachy, uneventful film full of actors I could barely understand and with all of the really important stuff happening off-screen. This is a movie about the 1745 uprising that manages to show only about a minute of one actual battle (Prestonpans I think). Even the climactic battle of Culloden is not shown -happens off screen.

Pretty much every character in this movie has no depth to them. Even the really good actors have nothing to work with to make their characters come alive. David Niven is a great actor, I’ve seen him in movies he was superb in, but he is totally miscast here as romantic royal hero. He’s too polite, too soft-spoken and too stiff. More importantly, he smiles too much. Way too much. So, my Dad is sending me to Scotland to launch a rebellion against the House of Hanover -smile. So the King of France didn’t send the troops and all I have is seven grizzled highland chiefs -smile. We’re fighting bloody battles with people being shot, stabbed, bayoneted and cut open with those massive Scottish claymores -smile. I’m on the run for my life with a bunch of bloodthirsty Germans on my trail -smile. It’s too much! Campaigns are being planned, battles fought or at least pondered and matters of life and death are dealt with and all the while Niven’s grinning like an idiot. I don’t know what they were going for but it just looks silly and unrealistic.

Refraining from comments on the overall movie is hard but with Niven’s portrayal of Prince Charles, it is simply impossible to get emotionally involved in his character when all he does is grin and go into the occasional wooden sad mood. It is hard to get emotional about the uprising when we never see battles being fought and it is hard to get too involved in his flight from persecution when we never really see any persecution. There were great cruelties visited on the Scots by the Duke of Cumberland in the aftermath of the ‘45 but all we ever see is occasional Hanoverian rudeness. The movie, is very much, a movie about the idealistic vision of the Bonnie Prince Charlie. Most know he was far from being a saintly, inspirational figure all the time, but even given what the film is and the effort to make the prince as sympathetic as possible the audience simply cannot conjure up much emotion for a character who does not show much emotion himself.

This film was made in the aftermath of World War II and the “bad guys” are pretty much German rather than British, still I doubt many Hanoverian sympathizers will appreciate it. They are portrayed as the enemy and yet are not even given the satisfaction of watching the final Jacobite defeat with the only portion of a battle being shown being, naturally, a Jacobite victory. Die-hard Jacobites may find the film at least tolerable since it is very much from the Stuart point of view but despite the great costumes, stunning locations and so on it is simply a dud of a movie and the portrayal of Prince Charles is so remote and almost other-worldly that one does not feel to have any better understanding of him after watching the movie. Perhaps one day a film will be made that is worthy of the dramatic story of the last Jacobite rising but, unfortunately, this is definitely not it and thankfully the part of Bonnie Prince Charlie will not be the role David Niven is most remembered for.
Posted by MadMonarchist at 12:29 AM