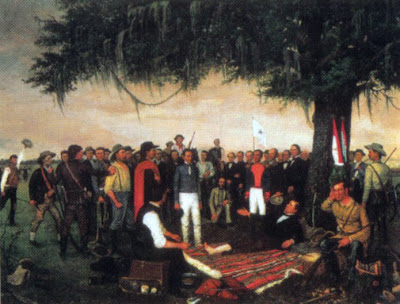 It was on this day in 1836 that the Republic of Texas won its independence from the Republic of Mexico at the battle of San Jacinto. The Mexican President, General Antonio Lopez de Santa Anna had abandoned his army and tried to escape disguised as a common soldier. However, when he was later captured the salutes of his men gave him away and he was brought before General Sam Houston. The Texas army wanted to hang Santa Anna for his cruelty at the Alamo and his order to massacre the Texas army at Goliad but Sam Houston offered clemency in return for the President's recognition of Texas independence. Even in this frontier fight between adherents of republicanism, there were still some monarchist ties. The man who interpreted between Houston and Santa Anna was Colonel Juan Almonte, leader of the regency junta that later invited Archduke Maximilian to become Emperor of Mexico; and the doctor who tended the wounded General Houston was Nicholas Descomps Labadie, a native of Windsor, Ontario in Her Majesty's Dominion of Canada.
Posted by MadMonarchist at 12:32 AM