Wu Zetian is one of the most remarkable figures in Chinese Imperial history and is the only woman to have ever ruled the empire in her own right. Her rise to power was hard and fraught with trouble but in the end she emerged successful. Born in 662 as Li Dan, she first came to prominence during the reign of Emperor Gaozong. With the name Wu Zhao she served as a secondary consort having previously been one of the concubines of his father Emperor Taizong. Ambitious from the very start she first secured the downfall of Gaozong’s wife Wang by suffocating her newborn daughter and framing Wang for the crime. With Wang out of the way she became Empress in her place.

Empress Wu Zetian quickly consolidated her power by using her influence to place her own supporters in positions of power. Her place was further strengthened in 660 when Emperor Gaozong suffered a stroke that left him nearly blind and paralyzed and all the more dependent on his domineering wife. She launched military campaigns of expansion that brought Chinese power to the widest extent ever up to that point, moving far enough west to meet up with Arab powers and conquering Korea in the east though Tibet remained defiant. Before the death of her husband she had the Crown Prince Li Hong poisoned and secured the succession of her own son Li Zhe whom she could dominate.

Li Zhe, who reigned as Emperor Zhongzong, was dominated by his wife rather than his mother and after only 6 weeks was accused to treason and Empress Wu Zetian replaced him by his younger brother Emperor Ruizong, who was totally her puppet and everyone knew it. In 690 Emperor Ruizong abdicated and Wu Zetian became to rule as Empress in her own right. Described as attractive, intelligent, politically savvy and an excellent judge of those around her, she proved a formidable monarch. She brutally eliminated possible rivals at court and put down all opposition with swift ferocity until her power was absolute and unquestioned.

Something of an early feminist of a sort (quite something in Confucian China) she commissioned a collection of biographies of great women and raised her late mother to the rank of dowager empress. However, for someone who could be so ruthless she secured a base of popular support through common sense efforts to ease tax burdens, increase salaries and diversify the bureaucracy. She also downplayed the importance of Confucianism by giving lavish support to the Daoists and especially the Buddhists whose beliefs attached more importance to the role of women. She had new temples built, her own images enshrined in them and finally went to such lengths as to have herself named “Holy and Divine Emperor” of a new dynasty.

For half a century Empress Wu Zetian dominated China but as she grew aged her previous good judgment began to fail her. Her male favorites became arrogant and increasingly corrupt, bullying the officials. Spending spiraled out of control and bribes and corruption became rampant. The public turned against her and when the bhavior of her two favorites (brothers) became so outrageous that a clique of courtiers had them murdered the Empress was powerless to act. Seeing by this that her time was truly up she abdicated the following day in 705. She died later that year and the Tang dynasty reverted back to the normal state of affairs. 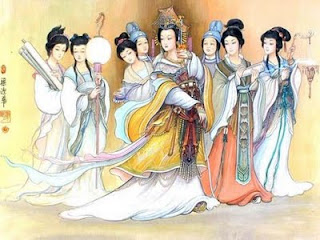