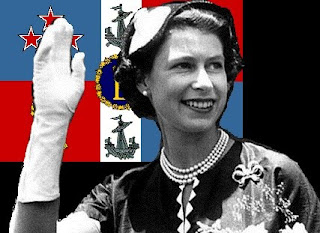 The New Zealand Herald reports that HM Queen Elizabeth II was given a special victory from New Zealand when monarchists won a victory in that South Sea realm when the Parliament defeated a bill put forward to hold a referendum on the future of the New Zealand monarchy. More women favored keeping the monarchy than men but overall republican sympathy was way down from where it had been only a few years ago. The heads of the republican-traitor camp are giving the credit to the dashing young Prince William who recently visited New Zealand and caused quite a favorable impression. This reaffirms my belief (and I'm sure that of many others) that the Commonwealth realms need more royal visits! A great birthday present for Her Majesty, as this monarchist victory has been called, and reason for a cheerful shout of God Save the Queen of New Zealand! However, before monarchists get too comfortable, keep in mind that the ruling party has said that a republic is bound to happen sooner or later and the head republican tyrant has said that they expect to have their republic once the Prince of Wales succeeds to the throne. So, carry on the fight Kiwi loyalists!

Posted by MadMonarchist at 5:47 PM