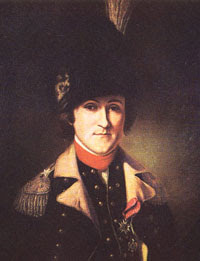 Is that monarchist wearing a Continental Army uniform? Yes he is and the life of Charles Armand Tuffin, Marquis de la Rouërie displays the original alliance of the United States of America and the Kingdom of France. Born into a noble Breton family in April of 1751 he embarked on a military career early in life and was known for being a tempestuous and somewhat reckless romantic. He joined the French Guard and once tried to kill himself when he was thwarted by the Comte d’Bourbon-Busset in a love triangle with a famous actress. At the end of 1776 he left from Nantes to join the American colonists in their fight for independence.

On the way to America his ship was attacked and sunk by a British warship but he made it to shore and was commissioned in the American cavalry by General George Washington as Colonel Armand. He recruited volunteers for his unit and paid for them himself. Originally attached to Pulaski’s Legion, after the death of the Polish commander the unit was renamed Armand’s Partisan Corps, a legion type unit consisting of infantry and cavalry made up mostly of foreign volunteers. On June 25, 1778 he was promoted to general and fought in the battles of New York, Monmouth, Short Hills, Brandywine, Whitemarsh, the campaign in Virginia and the siege of Yorktown. When he returned to France to obtain weapons and supplies for his men King Louis XVI decorated him with the Order of St Louis and upon his return was promoted to brigadier general by George Washington with whom he always remained friends and corresponded for the rest of his life.

After the war he returned to France he married a wealthy aristocrat (who later went mad) and became known as something of a liberal but also one devoted to the nobility and local government of Brittany. He was confined in the Bastille for demanding that the King return to the region its traditional autonomy for which he became a hero to the left. However, when the revolution began to break out in earnest he vehemently opposed the attacks on the aristocracy. Having originally supported the revolution he came to adamantly oppose it when it became clear that this was to be a radical re-ordering of French society that would be dominated by the Third Estate which had effectively declared war on the aristocracy.

The Marquis de la Rouërie became a leader of the Breton Association which advocated the upholding and strengthening of the monarchy along with their traditional rights and privileges. He pointed out that since the radicals had taken power the people had become more poor and more heavily taxed than they had ever been. Although the Marquis had never been an especially devout Catholic he also very much opposed the Civil Constitution of the Clergy which brought the Church under total government control. Finally, Rouërie had no choice but to take up arms with his counterrevolutionary forces (the Chouans) against the republicans. Sadly, the Chouans were defeated and Rouërie became a fugitive from the revolutionary government. In January of 1793 he fell ill and suffered a severe setback when he learned of the regicide of King Louis XVI. He died on January 30 and the Breton Association later fell apart with most falling victim to the Reign of Terror.
Posted by MadMonarchist at 12:20 AM