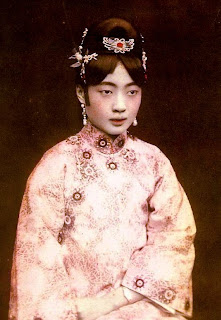 Empress Wan Jung (also known as Empress Wan Rong, Empress Xiao Ke Min and Empress Elizabeth) has the distinction of being the last Empress of China yet relatively little is really known about her. Most know her only in connection to her husband and most of what people generally know about her comes from only a very few sources, most of which are hard to accept as completely reliable. Part of the Daur Mongol ethnic group of Manchuria she was born on November 13, 1906 into one of the most prominent Manchu families. Her father, Rong Yuan, was the Minister of Internal Affairs under the Qing Empire. She was named Gobulo Wan Rong or “Beautiful Countenance” which most thought deserved.

Wan Jung was educated in an American missionary school in Tianjin and privately by the American tutor Isabel Ingram. The two became very close and even exchanged clothes and tried to dress alike. It was her western education that recommended her to the young former Emperor of China. She was 17 when she was chosen (after simply viewing a collection of photographs) to be the wife of the last Emperor. His first choice had been the Princess Wen Xiu but the courtiers thought her insufficiently attractive and so chose Princess Wan Jung for the role of wife and empress and assigned Wen Xiu the part of secondary consort. A year older than her husband, the two seemed to get along well but without great attraction to each other. In his memoirs the Emperor said he left his wife alone on their wedding night as he preferred the Mind Nurture Palace to the Palace of Earthly Peace.

In his memoirs (written under the eye of the communist party it must be remembered) the Emperor does not paint a very flattering picture of his first wife, describing her as a lavish spender and obsessed with social rank and her status as empress. Especially after they were turned out of the Forbidden City and took up residence in the Quiet Garden at Tianjin her expenditures were much commented on. She also began using opium, which the Emperor despised but without which she could find little peace. According to the Emperor it was only her attachment to her status as Empress which kept her from divorcing him as Princess Wen Xiu did but again, that view should not be taken as absolute fact. Most agree that she did not like the Japanese who became more involved with their lives after the move to the Quiet Garden and she opposed going to Manchuria for the establishment of Manchukuo.

Princess Eastern Jewel (Kawashima Yoshiko) was dispatched to befriend the Empress and help get her to Manchuria one way or another though by that time she and the Emperor were for all intents and purposes separated even if living under the same roof. Her opium use increased, she chain smoked and ate very little thus making her health worse and worse. The increase in her opium abuse is generally attributed to the strain of life in Manchukuo with all of the pressures of rank, none of the freedoms and under constant Japanese scrutiny. It is widely held that the Empress became pregnant in 1940 by the Emperor’s chauffeur and that the baby (a girl) was killed by the Japanese just after birth. This has been repeated often enough to be generally believed, and may well be true, but it should be stressed that this was always only a rumor and has never been proven one way or another.

In any event, her drug use increased even more to the point where she was almost constantly in an opium-induced stupor and her mental faculties began to fail her. This put the Emperor off, and he also seems to have blamed her for the loss of Princess Wen Xiu and eventually he was prompted by the Japanese to take another consort. He did say, however, that the Empress joined him in his increasing religious devotion during their time in Manchuria and others commented that it was only the hope of an eventual return to the Qing Empire and the Forbidden City that sustained the Empress. Others, however, maintain that she had no attachment to her old life at all and wanted nothing more than to live a modern, western-style life as exiles in Monte Carlo. Both possibilities came to nothing though with the end of World War II and the Soviet invasion of Manchuria. Empress Wan Jung, consort Li Yuqin and Princess Hiro Saga left by train for Korea trying to get to Japan but were captured by Chinese communists. They were finally moved to Yanji Prison where the Empress died of starvation and opium withdrawl on June 20, 1946. She was only 39-years-old. In October of 2006 a younger brother, Gobulo Runqi, just a year before his own death, had a tomb built for his sister at the Western Qing Tombs complex near Yixian.
Posted by MadMonarchist at 2:05 AM