Speaking of Godfrey of Bouillon 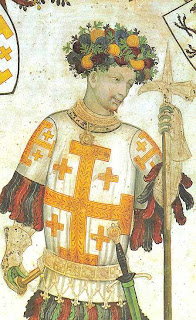 It was on this day in 1099 that Godfrey of Bouillon was elected "Advocate of the Holy Sepulchre" and the first ruler of the Latin Kingdom of Jerusalem at the victorious climax of the First Crusade. It is therefore fitting to have a little reflection on that long past monarchy. The Kingdom of Jerusalem was the dream, prize and crown jewel of the Crusades. It existed from 1099 until 1291 though the Holy City of Jerusalem fell to the Muslims earlier in 1187. There were roughly 23 monarchs over Jerusalem in that time and the claims to the kingdom and the dream it represented continued for much longer. In fact, the claim nominally continues to this day as King Juan Carlos of Spain still includes among his long list of titles that of "King of Jerusalem". Today it has become rather fashionable to emphasize the failures and shortcomings of the Kingdom of Jerusalem, and the Crusades as a whole, but it should not be forgotten that there were many great, heroic and upright figures associated with that long lost kingdom and the vision of those who founded it still shines in the mind all these centuries later. For a time the Latin Kingdom of Jerusalem was a beacon of light; a cosmopolitan kingdom, a crossroads of the world, a hub of trade and a place where Christian, Jew and Muslim lived and worked side by side in peace. One of those admirable figures was surely Godfrey de Bouillon.

The founding of the Kingdom of Jerusalem was the crowning achievement of the Christian victory in the First Crusade, summoned by Pope Urban II when Muslim forces invaded and threatened to overrun the Byzantine (Eastern Roman) Empire. The retaking of the Holy City by Christian forces was an event which gave no indication of the tolerance to follow. After miraculously snatching victory from the jaws of defeat, the Crusaders stormed into the city and in their pent up rage carried out a massacre horrific by all accounts. However, not all the crusaders took part in this shameful act, one being Godfrey of Bouillon, a great knight, who was offered the throne of the newly proclaimed Latin Kingdom of Jerusalem. He had not set out as the leader of the Crusade but during the course of events his courage, skill and chivalric behavior earned him the admiration of his troops and so was about the only man who commanded enough respect and trust to be offered the crown of Jerusalem.

Godfrey, however, was a humble man and refused to, as he put it, wear a crown of gold where Christ had worn a crown of thorns. Rather than the title of king he was called the Advocate of the Holy Sepulcher and was installed into that office in a solemn ceremony in the Church of the Nativity in Bethlehem. Arnulf of Chocques was elected first Latin Patriarch of Jerusalem, thus fulfilling the balance in leadership between the lay and the clerical that existed in the Middle Ages throughout Christendom and was one of the hallmarks of the era. There was some doubt, at the outset, as to whether or not the Kingdom of Jerusalem would ever have a monarch at all; some wanted to see the establishment of a Christian theocracy under the guidance of the Pope, and whether or not the new country would be able to maintain its independence. That matter was settled when Godfrey of Bouillon marched out with the True Cross before him and defeated a Muslim army at Ascalon in August, securing the immediate independence of Jerusalem.
Posted by MadMonarchist at 1:50 AM