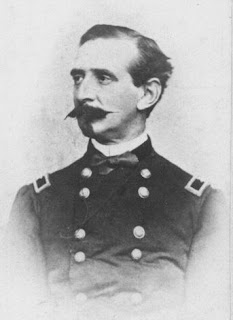 One of the last great royal soldiers of fortune was Prince Felix zu Salm-Salm.
It would be hard to imagine many other soldiers in the service of the Mexican Emperor having a more colorful career that Prince Felix zu Salm-Salm. Throughout his career he was to fight for the King of Prussia, the Emperor of Austria, the President of the United States and the Emperor of Mexico. He was born Felix Constantin Alexander Johann Nepomuk Prinz zu Salm-Salm at Schloss Anholt in Westphalia on December 25, 1828; the youngest son of Prince Florentin zu Salm-Salm. His first military service commenced on April 2, 1846 when he was commissioned as a second lieutenant in the Prussian cavalry, first with a Guards Kurassier regiment and then with the 11th Hussar regiment. He saw action for the first time during the Prussian-Danish War at the battle of Aarhuus on May 18, 1849. Although only an ordinance officer, Prince Felix took a handful of hussars and attacked a powerful troop of Danish dragoons on his own authority. This wild act of bravado left him wounded, a prisoner of the Danes and on the bad side of his superiors.

In 1854 Prince Felix left the Prussian army for the Austrian Imperial Army and fought in the Franco-Austrian War in 1859 in Italy. Afterwards, he made the mistake of running up huge gambling debts, a fault which the conservative Emperor Francis Joseph found particularly aggravating and he was dismissed from the army for conduct unbecoming an officer. While his father dealt with his debts Prince Felix decided to see what opportunities lay open in the New World and he sailed to the United States, arriving just in time for the outbreak of the Civil War. During the course of the war Prince Felix was to gain two very valuable things; a better reputation and a devoted wife. He met the German General Louis Blenker who gave him the rank of colonel and made him his chief of staff. He also fell in love with a beautiful and spirited redhead named Agnes LeClerq, the daughter of a Canadian colonel. The two married in secret on August 30, 1862 because her Puritan family did not approve of a Catholic wedding, but the new Princess Agnes was totally devoted to her husband and hated being apart from him.

The following month Prince Felix was given command of the 8th New York Infantry regiment, which he led into combat at the brutal battle of Anteitam, the bloodiest day in American history. Princess Agnes could not bear the situation and rode across the northern Virginia battlefields to join her husband, teaching herself to be a nurse to care for the wounded soldiers. Throughout the rest of the war she hardly left her husband's side and her zeal, courage and ingenuity eventually led to her being given the honorary rank of Captain in the Union army. Prince Felix, for his part, had more than enough opportunity to make up for his less than honorable reputation in Europe and by the end of the war he had been promoted to the rank of brevet brigadier general. When the war ended in 1865 he was briefly the commander of the North Georgia military district, but he had no taste for peacetime army life. He and his wife both dreamed of bigger things and Mexico seemed to be a place of great opportunity. With the war against the republicans under Benito Juarez there was a need for experienced military men, and with his princely German background they would have almost been assured a prominent place in the glamorous society around the Mexican Imperial Couple. Princess Agnes was at first against such a sudden move, but they set out for Mexico in the summer of 1866.

Prince Felix met Emperor Maximilian while on his way to Mexico City and the Emperor was impressed enough to give him the rank of colonel in the Imperial Mexican Army and make him his personal adjutant. By this time, most of the foreign units had gone back to Europe and it was comforting to Maximilian to have a German at his side to talk to. Prince Felix accompanied Emperor Maximilian to Queretaro where ensued the climactic siege which decided the fate of the Mexican Empire. Prince Felix proved his bravery on numerous occasions, leading forays against the republican lines that did considerable damage to the enemy considering the handful of men who took part. Nonetheless, Queretaro was ultimately doomed and Prince Felix was taken prisoner, held with the Emperor and his generals in the convent of Santa Brigida. Other than the Minister of War and Jose Luis Blasio, the Emperor's secretary, Prince Felix was the only non-general held in the convent. Later on, some would mistakenly think he had been a general in the Mexican army since he used a borrowed generals uniform to pose for a photograph.

When President Benito Juarez had Emperor Maximilian executed along with his top generals Miramon and Mejia, there was an international outcry against the Mexican republicans. Juarez defended his inhuman killing of the Emperor, but the backlash was enough to save the lives of other men, like Prince Felix, who had also been sentenced to death. The ruling was commuted to seven years in a Mexican military prison for the dashing German officer. Fortunately for Prince Felix, he had a wife like Agnes on his side. She braved Mexican bandits and Juaristas to go to the aid of her husband, pleaded with Juarez on his behalf and shook down almost every foreign ambassador in Mexico for money to bribe Mexican officials. Finally, the determination of Princess Agnes paid off and wishing to be rid of both of them the Mexican government changed his sentence to permanent exile from Mexico, which was happily accepted.

The couple headed for Europe where Prince Felix tried to rejoin the Austro-Hungarian Army but his unsavory reputation had not gone away during his adventures in the U.S. and Mexico. Instead, he once again joined the Prussian army in 1868 though with less rank than he held in America. He fought valiantly in the Franco-Prussian War of 1870 and died from wounds received at the battle of Gravelotte-St.Privat on August 18. Princess Agnes had continued her humanitarian work with the army alongside her husband as she had in America and was honored with the Prussian Medal of Honor. She died in 1912 in Germany. Prince Felix of Salm-Salm had served in four armies; Prussian, Austrian, American and Mexican; and had fought in five wars and was twice a prisoner of war. His story, as well as the equally colorful life of his wife, is proof that real life stories can sometimes be far more dramatic than any work of fiction.

Posted by MadMonarchist at 12:43 AM