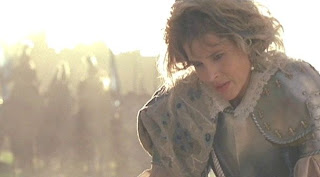 First, a word of religious warning for readers of the Roman persuasion. The award winning 1998 film "Elizabeth" certainly does not try in the least to be fair toward the Catholic point of view and virtually every Catholic in the movie is portrayed as a horrible villain --but some still play it very well. My absolute favorite character in the movie was Queen Marie d'Guise played by Fanny Ardant, who as this film shows is certainly growing old gracefully. She plays the part to perfection even though it is a part totally out of touch with historical reality. In this movie, Marie d'Guise is essentially a cruel, ambitious and somewhat degenerate French temptress who is killed (off camera) during an illicit liaison with Sir Francis Walsingham. Marie d'Guise (the real one) was nothing like this, in fact, if anything it was she who was the victim of English treachery, and on a superficial note, by the time of the reign of Elizabeth I, Marie d'Guise looked nothing like Fanny Ardant but had by then become a rather large and sickly woman. So, why do I like her? She plays the part very well, and who could resist a French woman of her mature beauty riding on to the battlefield with an armor breastplate over her dress, glorying in her triumph over the English army? Warrior queens are usually sure-winners with me. She completely captured the style the filmmakers were going for as being strong, cunning, attractive and dangerous. The real Marie d'Guise was totally the opposite as far as her morals but she was a strong woman and a gifted ruler, always willing to face the enemy. I'm sure the real Queen would not have appreciated how she was portrayed, though she probably wished she looked as good as Ardant at that stage in her life.
Posted by MadMonarchist at 2:28 AM