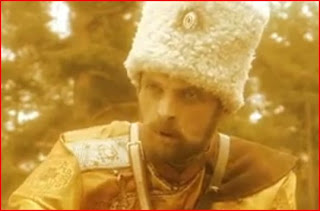 Judge Sonia Sotomayor's first appearance before the U.S. Senate Judiciary Committee has been a perfect example of the radical, revolutionary nature of the B. Hussein Obama administration. The ruling party has been cheering endlessly about the historic nature of Sotomayor's nomination to the Supreme Court as she will be (when confirmed, which is all but assured given the Democrats' absolute control of the government) the first "Latina woman" on the U.S. Supreme Court. She will also be the most openly racist person to sit on the high court since the end of segregation. However, she is a perfect example of what we have come to expect from the B. Hussein Obama administration. Whereas Obama has spoken proudly of his father and grandfather from the British colony of Kenya who fought their colonial "oppressors" he has also praised Sotomayor whose parents were from the U.S. commonwealth of Puerto Rico and has spent most of her life fighting (in legal ways) against the country she views as an oppressor.

It is only now, with an administration in power bent on the absolute destruction of the U.S.A. that the Democrat Party feels able to crow again about American greatness. And, as usual at times such as this, the British monarchy must suffer insult. This time it was at the hands of the vile Senator Chuck Schumer of New York in his introduction of Judge Sotomayor who spoke with such pride at how Americans had thrown off the shackles of monarchy, rejected gentry and aristocracy and started from scratch to build a society that was truly equal. Nowhere else in the world, Schumer asserted, would the rise to power of someone like Sotomayor be possible. I guess no one told him that Canada (a monarchy) has a minority woman as Governor-General (which is higher than an assistant Supreme Court justice I assure you) and she is not even the first one. Of course, I see that as nothing to boast about in and of itself but that is what is at the heart of Obama policy across the board and Sotomayor's nomination; that it doesn't matter who you are as much as "what" you are -so long as you are a liberal revolutionary mind you.
The Democrats have long loved to play the game of racial politics and we had to know it was coming with the Obama administration though some clung to the hope that he would be past that as a mixed-race individual. However, whether he is or is not does not ultimately matter because he can, has and will be used as a symbol for further upheaval elsewhere. Monarchies have not been immune. I have already seen stories of Obama fans in monarchies such as Canada, Britain and even Sweden pointing to their lack of an "Obama" as a good reason for scrapping the monarchy. That way they can have a president and then they can elect someone like, oh let's say a mixed-race, trans-gender lesbian just to show how "progressive" they are. Think I'm being an alarmist? Check out this full-page republican advertisement from Sweden: 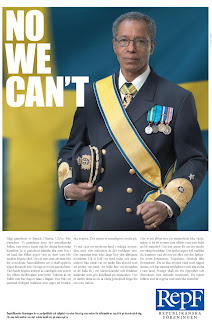 Let no liberal revolutionaries lead you astray by thinking that Obama and his agenda is inconsequential to monarchists. He is inherently disruptive toward monarchies even without his policies which, by the way, have been to snub monarchial allies like Britain (who he's never forgiven for ruling Kenya) and try our best to 'make nice' with revolutionary, republican regimes like Cuba, Venezuela and Iran. Racial politics as illustrated with the Sotomayor nomination, spread discord and disunity which are poison for monarchial stability. It happened to the Hapsburgs. I know this is a touchy subject and I know if I had good sense I would just ignore it. It makes people 'uncomfortable'. But how much good sense could I have? I am ... The Mad Monarchist.
Posted by MadMonarchist at 4:43 PM