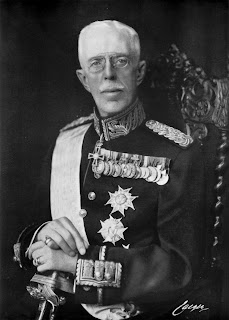 Possibly the most controversial Swedish monarch to reign in the 20th Century was King Gustaf V. Today Sweden is known for having an entirely symbolic monarchy but that was not the case in the reign of Gustaf V who had no hesitation about being a king and acting like one. He was born on June 16, 1858; the eldest son of King Oscar II. In 1881 he married Princess Victoria of Baden who herself had Swedish royal blood in her veins. On December 8, 1907 he succeeded his father as King of Sweden. His conservative attitudes quickly came to the surface as he opposed the liberal trend that had been sweeping the country for some time. He opposed the spread of democracy, the increasing demands of labor union groups and political interference with the military budget. King Gustaf V was the last Swedish monarch to serve as Commander-in-Chief of the military, which he did until 1939, and was a duty he took very seriously.

Sweden remained neutral during World War I but there were real concerns on the Allied side that the Swedes might intervene on the side of the Central Powers. Queen Victoria was naturally sympathetic to the German side and Kaiser Wilhelm II thought highly of her. To what extent Gustaf V favored the German cause is debatable but much is attributed to the sympathy of his German wife and his very conservative character. Concerns that Sweden would join the Central Powers became a big enough issue that Gustaf V organized a meeting with the other Scandinavian powers to demonstrate their unity and their resolve to remain neutral. However, Sweden did benefit greatly from increased trade because of the war. More controversial would be his actions before and during World War II.

Many unfair accusations have been made about Sweden and Nazi Germany which are not worthy of consideration. King Gustaf V tried to persuade Hitler to drop his anti-Semitic policies while on a visit to Berlin but to no avail. Much has been made of the King's letter of congratulations to the Nazi leader following the German invasion of the Soviet Union for what the King called taking on the "Bolshevik pest". His PM tried to stop it but the King sent the letter anyway. However, it is important to keep in mind the fact that Swedes had been greatly alarmed by the Soviets gobbling up the Baltic states and especially the unprovoked Soviet invasion of Finland. The region had once been within the realm of Sweden, the Swedes were naturally sympathetic to the valiant Finns, feared Soviet aggression getting closer to them and many Swedes had volunteered to go to Finland to fight the Red Army. Because of the events and politics of World War II it is all too convenient to forget that Hitler had not been the only dictator who had been invading and conquering weak neighbors. The King, in fact, wanted to do more to help the Allies, even to the extent of allowing Allied troops to pass through Swedish territory but the government, fearing Nazi retaliation, would not allow it. He also used Swedish neutrality to try to gain better conditions for those held in Nazi prisons and welcomed many refugees.

The year after the war Sweden was an early member of the United Nations but thanks to the influence of the Social Democratic Party, which King Gustaf V always opposed, alliances went no farther and Sweden remained mostly neutral in the Cold War as well. In many ways Gustaf V was the last "traditional" King of Sweden. Changes were already underway during his reign which he resisted but which would come into effect later. He viewed his kingship as a duty and not something he could completely place in the hands of others. There might have been more strife in the government had not his reign been so busy with a European crisis after another. He died in Stockholm in 1950 leaving the throne to his son Gustaf VI Adolf whose long reign would see a more total transition of life and government in the Kingdom of Sweden.
Posted by MadMonarchist at 12:43 AM