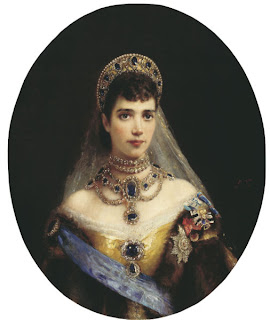 The mother of the last Czar of Russia, Maria Feodorovna was born HRH Princess Dagmar of Denmark, daughter of King Christian IX and Louise of Hesse-Cassel in 1847. Among her royal relations was her brother King Frederick VIII of Denmark, her brother King George I of Greece and her nephew King George V of Great Britain. Her marriage into the Romanov dynasty was somewhat unprecedented as the Russians traditionally married German brides but the Teutonic ladies were less attractive in her time due to the rise of pan-Slavic nationalism which tended to view the Germans as their natural enemies. So it was that Czar Alexander II went north in search of a bride for his son and heir the Czarevich Nicholas. The choice he made was the petite Danish princess with deep eyes Dagmar. Betrothed in 1864 disaster struck the following year when Nicholas died of consumption, however, on his deathbed he urged his fiance to marry his brother Alexander and placed her hand in his. The next year, in Copenhagen, while looking at a picture album Alexander asked Dagmar to be his wife. She accepted and the couple were married that same year after Dagmar had converted to the Russian Orthodox faith and became Grand Duchess Maria Feodorovna.

The two were a somewhat odd but perfect couple. Alexander was a large, strong, bear of a man while Maria (or Marie or Minnie as her family called her) was extremely small and delicate. However, she was extremely popular among the Russian people for her dedication in learning Russian and understanding the people. Whereas her husband was very blunt, casual and detested glittering social events and the like it was Marie who played the part of the perfect hostess, graceful, charming and refined. In 1881 Alexander II was killed in a bomb attack by revolutionaries and his son became Czar Alexander III and Marie his Czarina. Between the two of the them they made a close to perfect couple and they were quite devoted to each other. Unlike previous Czars, Alexander III never took a mistress and remained faithful to Marie as long as he lived. For her part, she stayed out of politics and focused on her husband and children.

The one exception to Marie's "no-meddling" policy was when it came to Germany which was a country she detested. Following the Prussian victory over Denmark in 1864 this was rather common among Danish consorts and the fact that Danish consorts were so widespread around the monarchies of Europe played no small part in explaining why the Germans came to complain so often of being surrounded by enemies. When Alexander and Marie's oldest son, the future Nicholas II, determined to marry a German princess, Alix of Hesse-Darmstadt, Marie was firmly opposed to it. For once Nicholas would not be dissuaded and sadly mother and daughter-in-law were never able to get along. Aside from Marie's dislike of Germans in general the two were simply very different personalities. Where Alix was shy and aloof, Marie was outgoing, warm and friendly. Whereas the ultra-religious Alix tried to avoid immoral people at court (quite a job) Marie knew how to go along to get along with everyone.

When Alexander III died and Nicholas II became Czar Marie was extremely supportive of her son, though the friction with Alexandra continued. She was absolutely heartbroken by the death of Alexander but had faith in her son and the future of Russia. It is worth noting that the Empress-Dowager was so popular that even the most rabid revolutionaries ruled out any attack on her. When the revolution finally broke out Marie went to the Crimea and was there when word first came that her son and his family had been massacred. For a woman who had already been through so much, it was too much to take and she refused to believe it. As long as she lived she remained convinced (perhaps as a mental-self defense) that her son and his family were alive and that they had escaped from Russia and were living secretly in some remote region.

Marie spent the rest of her life living in Copenhagen where she was very supportive of the Russian exile community. She died in 1928 and in 2005 an agreement was reached between Queen Margrethe II of Denmark and Russian President Vladimir Putin for the remains of the famous Empress-Dowager to be moved to Russia and buried next to her beloved husband in the Peter and Paul Cathedral.

*Romanov fun fact: Alexander III liked to show off his strength by picking up Marie with one hand, her sister with the other, and lift them up to eye level, holding them at arm's length!
Posted by MadMonarchist at 1:41 AM