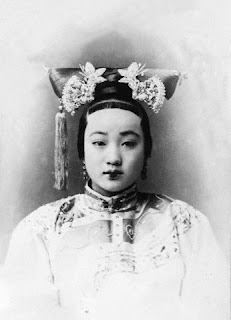 One of the most tragic (and sadly there are many) stories out of late Qing Imperial China is the story of the Imperial Consort Zhen, better known as the "Pearl Concubine". Born in 1876 to the Tatala clan, Zhen was the younger sister of Jin who was already a consort to Emperor GuangXu when Zhen herself was taken into the Forbidden City as a concubine. During this time the most powerful person in China was the Grand Empress Dowager Tsu-hsi or Cixi who at first welcomed the Pearl Concubine, impressed with her attitude and her many talents. She saw to it that the Pearl Concubine was indulged in her interests and brought in the best artists and musicians in the Chinese Empire to teach her. However, she quickly came to detest the young consort when she began to urge Emperor GuangXu to more or less be his own man and act independently of the powerful Dowager. Zhen also encouraged traditional anger against her by her interest in photography to the extent of even allowing foreign photographers inside the walls of the "Great Within" to take pictures.

The Pearl Concubine soon became known for her independence and non-traditional habits such as dressing in men's clothes and adopting certain western habits. All of this greatly angered Cixi as did her influence over Emperor GuangXu who seemed to be truly in love with her. When she supported the Emperor in attempting a military coup against the Empress-Dowager with reformist elements in the Qing army Cixi had the Pearl Concubine imprisoned. It was also during this time that the Boxer Rebellion broke out in China and the Empress-Dowager finally decided to support the Boxers in an effort to drive out the foreign elements in China in the hopes of solidifying Qing rule. However, this resulted in the "8 Nation Alliance" of 1900 and the invasion of China by a multi-national army. The troops marched to the relief of Peking where the foreign legation had been besieged by Boxer and Imperial Chinese forces for 55 days.

The Boxers were defeated and the Imperial Court was forced to flee the Forbidden City. Legend has it that Cixi took this opportunity to get rid of the troublesome Pearl Concubine and ordered her to kill herself. However, when she refused and even had the audacity to call for the Emperor to stay in Peking and deal with the foreign army himself the Empress-Dowager had her loyal eunuchs murder the Pearl Concubine by throwing her into a well behind the Ningxia Palace. Some have disputed the veracity of this story, but however it happened, the Pearl Concubine was killed and Cixi seemed to be the obvious guilty party. She was only 24 years old. Her older sister, whom the Emperor had never really favored, survived them all and even took the Empress-Dowager as her role model and remained a force to be reckoned with after the Qing abdication when the last Emperor of China still lived in the Forbidden City.
Posted by MadMonarchist at 1:12 AM