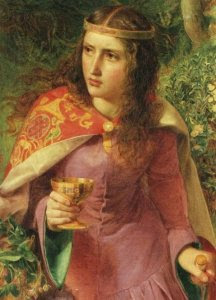 One of the most famous queen consorts in English history and one of the most famous and powerful women in the world in her time was Eleanor of Aquitaine. When Eleanor was 15 she succeeded her father as Duchess of Aquitaine and Countess Poitiers. Only a few months later she married King Louis VII of France. She was known for her education, love of outdoor sports and her outgoing personality. Louis was absolutely smitten with her even though she was far from popular with most others. The leaders of the Church were often critical of her outspoken and flamboyant style and many at court rolled their eyes at the amount of money Louis spent on her.
When Louis VII came into conflict with Pope Innocent II the Queen tried to influence St Bernard of Clairvaux to intercede with the Pontiff in their favor. St Bernard did no such thing and reprimanded the Queen for being on the wrong side of the argument and for meddling in political matters. Louis felt terrible about the whole ordeal and determined to make up for it by answering the call of Pope Eugenius to march in the Second Crusade. To the shock of everyone Eleanor insisted on going along. Since a great deal of men and money were coming from her extensive estates she considered it her right. Eleanor was considered a distraction, which was probably true, but she was also blamed for disasters that were not her fault and her good advice was often ignored. Louis VII was simply not cut out to be a great crusader. Finally he placed his wife under arrest and her situation was not helped by the affection she showed her uncle, Raymond of Antioch with whom most believed she was having an affair (probably untrue).
The whole enterprise was the effective end of their marriage and the couple soon sought an annulment. Pope Eugenius III tried to reconcile the pair but it was to no avail and on March 11, 1152 Louis and Eleanor dissolved their marriage and an annulment was finally granted. Still the mistress of vast and wealthy lands Eleanor was not lacking for new candidates for marriage. She, however, set her sights on Count Henry of Anjou, Duke of Normandy. There were rumors that one of Eleanors lovers had been Henry's father, Geoffrey V, who warned his son against the lovely but worldly and ambitious woman. In any event, the two married on May 18, only 6 weeks after the annulment of her first marriage. In 1154 husband and wife were crowned King Henry II and Queen Eleanor of England.
In the years that followed she gave Henry II five sons and three daughters however the two fought constantly and over time Henry's affairs became impossible for Eleanor to overlook or ignore. When their son Henry led a rebellion against his father Eleanor supported him and when the campaign failed Henry II had his wife arrested and put under house arrest in various places and was only released for certain religious holidays. This situation lasted until Henry II's death in 1189 when Eleanor's favorite son became King Richard I of England. Richard ordered the release of his mother and she effectively ruled England on his behalf during Richard's absence. It was Queen Eleanor who negotiated the ransom of Richard with the German Emperor after he was captured on his way home from the Third Crusade. She outlived Richard and still carried out official duties during the reign of her son King John before her death in 1204, outliving all but two of her children. Her story has been retold many ways in many styles ever since and even now she remains a figure of fascination and controversy. 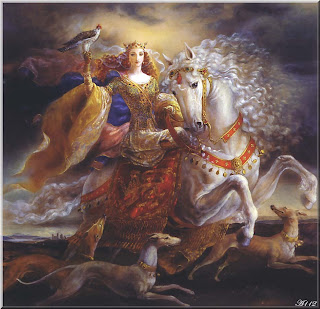