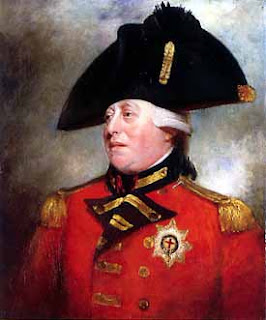 What better monarch to feature for a July 4th post than His Majesty King George III? He may be the only monarch in the history of the world to be vilified in the founding documents of another country. What is sadly, even criminally unjust, is that King George III was as far from being a cruel, despotic tyrant as any man could be. He was, in fact, an upright, generous man of simple tastes, extremely devoted to his family and could, with relatively little opposition I think, be considered the most able and admirable monarch of the Hanoverian dynasty of Britain. This monarch who came to be so hated in America was very popular in Britain, even beloved. He was the first king of the House of Hannover not to speak with a German accent, who considered himself truly "British" rather than a German who simply tolerated Britain for the brief periods he had to stay on the island. It can honestly be said that George III was the first truly British monarch to reign since the death of Queen Anne. What is more ironic, is that he was quite popular in the American colonies as well, the attachment to the Crown being the only thing which really prevented independence from being declared much sooner.

George William Frederick was born on June 4, 1738 in the same building coincidentally that was used by British and American leaders working together to form the first Allied Force Headquarters by General Dwight D. Eisenhower and where the invasions of North Africa and Western Europe were planned out by the two great English-speaking countries of the world in cooperation against Germany. George was the son of Frederick, Prince of Wales, and succeeded his grandfather King George II in 1760. One year later he married Princess Sophie Charlotte of Mecklenburg-Strelitz, a marriage which was happy and produced 15 children. Unlike those before him, George III was never unfaithful to his wife and had principles too strong to ever consider taking a mistress.

Once on the throne, King George III broke alot of new ground, but also in many ways returned Britain to a more traditional monarchy rather than the Parliamentary tyranny it had been since the fall of the House of Stuart. King George III was the first monarch to turn over the profits of the crown lands to the government in exchange for an allowance and started the tradition of royal patronage for charity, giving generously from his private finances to a number of causes. These were innovations, but George III also worked to make the British monarchy more traditional. Under previous rulers, the Crown had become mostly symbolic and totally dominated by Parliament; which itself was dominated by the Whigs since the Tories had been so associated with the House of Stuart. George III was determined to make Britain a truly constitutional monarchy again, with power held by commons, lords and the crown.

This trend, and the way George III was determined to choose his own ministers, was used by the American revolutionaries to portray the King as a tyrant, which is extremely unfair. Had it not been for the docile nature of previous monarchs, his actions would not have seemed unusual at all. He never over-stepped his powers, but simply chose to exercise them in the traditional way. This caused the Tories to again become a major political force for the first time since the overthrow of the House of Stuarts. George III was, if nothing, a man of principle and a man who took his responsibilities seriously. However, doing so did not always win him admiration. When the King granted religious tolerance to the Catholics of Canada, many Americans shouted that George III was becoming a "Papist" and would soon restore Catholicism and royal absolutism in the British Empire. Later, when the King refused to grant tolerance to the Catholics in Britain (not because of any prejudice but in obedience to his coronation oath) he was then ridiculed once again for being so harsh. While American revolutionaries attacked him for being a "tyrant" and refusing to respect their rights, they also condemned him for respecting the rights of the Indians in the mid-west whose lands he declared off-limits, but which the colonists were eager to claim for themselves.

The American Revolution was certainly the major event in the reign of King George III, and few others had such a firm grasp on the actual situation, before during and after the conflict as the king did. When an offer to the colonists which granted them full autonomy under the British Crown was spurned, George III was the most determined to fight on until victory was won, threatening to abdicate before he would ever accept the legitimacy of the United States. He was confident that if Britain allowed these 13 colonies to win in such a way would be to instantly invite rebellion in every other colony around the world and the British Empire would collapse. This is often pointed to in an effort to mock George III as being unjustly paranoid about an independent America. However, were it not for the horrific French Revolution and the resulting "rally effect" across the British community and the conservative backlash after the wars, things might have turned out as King George had predicted, though fortunately they did not.

However, considering how steadfastly George III had opposed American independence and the peace treaty which recognized the new nation, once it had happened he showed considerable grace in extending the hand of friendship toward his rebellious former subjects and saw to it that the United States remained a major trading partner of the British Empire. In spite of the fact that the fall of North's government which coincided with the victory of the United States brought about a new trend of reducing the role of the Crown in politics and going back to the tradition of the previous Hanoverians of being little more than figureheads, King George III displayed his brilliant statesmanship by again restoring to a more normal situation the rights and powers of the Crown in British government. The 1780's saw William Pitt the Younger attain and keep the post of Prime Minister mostly through the support of the King. Britain began to rebuild its pride after the American humiliation and an era of unprecedented power and prosperity opened for the British Empire.

King George III became a more relaxed man. His marriage to Queen Charlotte was very happy for both of them, with 15 children the succession was in no danger, and the King had time to do the things he enjoyed most such as dabbling in agriculture and spending time in the country. With the onset of the French Revolution, the King commented that he believed this upheaval was God's punishment on King Louis XVI for supporting the American revolutionaries. He also had typically Hanoverian problems with his son and heir, Prince Frederick, but the worst incident came in 1788 when George III suffered his first attack of the illness which was to eventually take away his sanity, and some time later, his life. He was given brutal treatment by doctors of the day, but was still able to pull out of his insanity for brief periods of relative normalcy, it being on one of these occasions that he stopped the passage of a regency bill.

The French Revolution though, brought on more trouble as it was only a matter of time before at least some traces of the republican disease crept into Britain, and there were several attempts made to assassinate George III. One attempt was made in 1800 while the King was at the theatre. After narrowly avoiding death, the King showed great courage by remaining calm and ordering the show to continue, at which point the crowd broke out singing "God Save the King". Eventually of course, his illness became too severe and with no signs of improvement and in 1812 he was declared unfit to rule and his son was made regent in his place. King George III lived out the rest of his life locked away from public view in Windsor Castle, with the Star of the Order of the Garter pinned to his robe as his only badge of rank. However, the British people honored their king for the care and leadership he had shown in the past. He had seen Great Britain through her most difficult trials as a 'United Kingdom' and always acted as an honest, upright and highly moral man, providing leadership through example as well as state policy.

It is criminal (there can be no other word to describe it) that the United States had to slander and defame King George III in order to justify their own rebellion. He was, in every respect, the picture of an ideal British monarch. His compassion and generosity are well known, his steadfast principles and upright moral character are second to none in the Hanoverian dynasty and his wise political leadership restored to Great Britain, for a time at least, her ancient and marvelous constitutional monarchy where power was actually shared by the lords, commons and crown rather than being held completely by an elite few on the commons' behalf. He certainly deserves a place of honor among the list of the truly great monarchs of the British isles.

Since Britain first at Heaven's command
Arose from out the Azure Main,
Did ever o'er this jarring Land
A monarch with more firmness reign?
Then to the Natal Day we sing,
Of George our sacred friend and King
-from a song by American loyalist in honor of George III's birthday in 1777
Posted by MadMonarchist at 12:33 AM