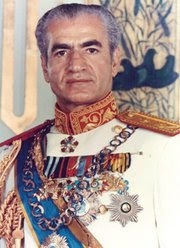 H.I.M. Shah Mohammad Reza Pahlavi has the unhappy distinction of being the last royal ruler of Iran, the last in an ancient line of great Persian monarchs before the rise of the current Islamic Republic. Born in 1919 he grew up in the tumultuous world of Iranian politics. In 1925 his father overthrew the last Shah of Qajar dynasty and made himself Emperor with Mohammad proclaimed as "Crown Prince of Persia" (his father would later request all nations refer to the country as Iran). He studied in Switzerland before returning home to begin his military training. Within a few years he was thrust on to the world stage when British and Soviet forces invaded Iran and deposed his father in order to secure supply lines through the country and stop Iranian trade with Germany. On September 26, 1941 Mohammad Reza Pahlavi was formally declared "King of Kings, Light of the Aryans and Supreme Warlord". His reign would be one of great social and technical progress for Iran but also one of great trouble and unrest.

Early on the Shah had growing problems with the Shiite clerics who objected to his modernization efforts and the incease in social freedoms; especially for women. An alliance began to emerge between these fundamentalists and the nationalists who opposed the Shah's friendship with the West and his recognition of the State of Israel. They also resented Western meddling in Iran which was happening. The Soviets were supporting the communists in Iran but the US and UK took a more active role in bringing down the Prime Minister who nationalized Iran's oil reserves in 1951. The PM, Mohammad Mossadegh, had believed that the West was supportive of his nationalist movement but the CIA and SIS funded a coup against him. When it failed the Shah was forced to leave the country for Rome. Later he was able to return, remove Mossadegh and restore himself. The communist elements in the country had supported Mossadegh and attempted a coup which forced the Shah to leave the country again though the effort failed and the Reds turned against the former PM. Their success in street violence frightened the Islamic leadership into switching back to the Shah's camp. The Shah also survived several assassination attempts, some of which originated in the Soviet Union.

One of the best things about the late Shah was that he was a monarchists' monarch. He supported the royalists against the republicans in the civil war in Yemen, helped the Sultan of Qaboos stop communist rebels in his country, maintained good relations with the Kingdoms of Saudi Arabia, Jordan, Morocco and the Gulf emirates while fighting the socialist and Baath party republican regimes in Iraq. However, radical elements still plotted against him because of the social progress he pushed and his continued good relations with the US and United Kingdom. During his reign education was massively expanded, healthcare was expanded, women were given the right to an education and the right to vote and the national economy improved greatly. This brought new outside trends to Iran like modern fashion, Hollywood movies and dance clubs all of which the radical clerics vehemently opposed. It had taken some time but the Shah's rule seemed secure, the regime stable and Iran was quickly becoming a modern, prosperous and well educated country. It was then quite a surprise when demonstrations flared up against the monarchy in 1977 orchestrated by the Ayatollah Khomeini.

The US government under President Jimmy Carter pressured the Shah not to take action against the radical elements, promising support but never delivering on it and indeed denying the Shah vital material assistance. By 1978 strikes were gripping the country and the Prime Minister prevailed upon the Shah to leave Iran for a short time until things stabilized. After he left his security forces were dissolved and the Ayatollah organized his own government, refused to deal with the Prime Minister and announced the Islamic Revolution. On February 11, 1979 the ancient Iranian monarchy formally came to an end and the Shah would never see his homeland again. The Shah spent the rest of his life in exile, living in various countries around the world as the revolutionary regime continued to demand his return and that of his family to face execution. His health grew worse and though he lived to see many of the governments who had failed to support him regret their previous policies he always insisted that it gave him no satisfaction. He only wished things could have been different. He died in Egypt in 1980.
Posted by MadMonarchist at 12:25 AM