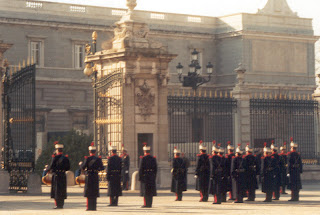 The Guardia Real or Royal Guard is the elite forces of the Spanish Royal Army charged with the protection of the Royal Family and His Catholic Majesty the King of Spain. Spanish forces from all three armed branches train and serve with the Royal Guard and though most think of them in terms of parades, ceremonies and mounting palace guards they are a highly trained, front-line combat unit as well. The Spanish Royal Guard is currently about 1,500 strong and has had units on active duty in Afghanistan. Probably the most colorful section of the Royal Guard is the cavalry which cannot be missed in their long white robes and white-plumed helmets. Since the 8th Century they have been providing security for the Spanish kings. As well as continuing this tradition of service they also protect foreign visitors on official visits and provide security on state occasions. Their motto is "For Spain, All for Spain!" One of their more notable commanders was General Juan Prim, famous for his battles against the Carlists but most known on this side of the Atlantic for leading the initial Spanish forces into Mexico prior to the arrival of the French and British. Some feared that the famous liberal general might try to imitate the conquest of Cortes. Of course it did not happen and after causing a great deal of fuss and fear he left Mexico to the French.
Posted by MadMonarchist at 12:44 AM