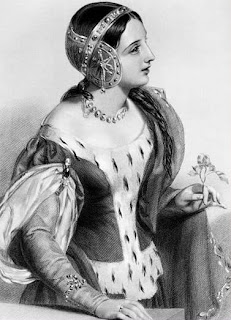 One Queen consort of England who had a life far more "interesting" than most was Queen Isabella, the only daughter of King Philippe IV of France who came to be known as the "She Wolf of France". Born in Paris probably sometime in 1295 she was pledged as an infant to marry the first Prince of Wales who would become King Edward II of England. It was hoped that the marriage would solidify peace between France and England and bring some settlement to their conflicting claims. Pope Boniface VIII favored the match but the great King Edward I of England had second thoughts and the marriage did not actually occur until the "English Justinian" had died. The two married finally in 1308. Edward I (though his reputation today has been sullied by Hollywood) was considered the ideal monarch; a wise lawgiver, a great general and all the rest. His tall, handsome son was expected to be much the same and was initially widely popular. As time went on though he would fail to meet most expectations.

Isabella was probably only around 12 at the time of her marriage but was considered one of the most beautiful girls in Europe. In time Edward II and Isabella had four children but the Queen suffered the indignity of having a husband who seemed to prefer his male favorites to her. Isabella tried to make the best of it and to use her position to have her husband's male lovers sent away but in the end he chose his degenerate lifestyle over his wife and from that time on Isabella felt no qualms about viewing her husband as her enemy. Perhaps thinking that turnabout was fair play she took a lover of her own in the person of Roger Mortimer; a father of 12 who had married money. In 1325 Isabella's brother, King Charles IV of France, attacked and conquered the English territories in France and Edward II sent Isabella to make peace. It would prove to be only one of Edward's many poor decisions.

The King of England who was such a disappointment, and who angered many of the nobles with his advancement of his male favorites, looked to Isabella for leadership in mounting a coup against him and this Isabella did. She and Mortimer raised an army of their own in France and naturally her brother did nothing to stop her. They gained more men and ships from one of her powerful relatives in Holland and in September of 1326 landed in England to depose Edward II and take the throne. Edward offered a reward for the head of his wife but Isabella responded by offering an even larger reward for the head of her husband. It helped that Edward II was such an un-inspiring leader and most of those who were his allies abandoned him without putting up a fight. Edward was captured by his wife's army and abdicated in favor of their son who became King Edward III. Eventually Edward II vanished, most say he was murdered though it is still debated as to who was responsible and others say he escaped to a life of seclusion.

Queen Isabella and her Mortimer ruled England as regents on behalf of her son until he came of age in 1330. The 18-year-old King Edward III then had his mother and Mortimer arrested. Mortimer was later executed while Queen Isabella lived the rest of her life under a rather loose sort of house arrest. She was by all accounts a loving grandmother and became more religious in her old age taking the habit of the Poor Clare Sisters. She died in 1358 and was buried in London in the Franciscan church at Newgate in her wedding dress along with the supposed heart of Edward II. Opinion on Isabella remains mixed but it says something that her husband is still considered one of the most failed Kings of England and her son King Edward III as one of the greatest monarchs of the English Middle Ages. She might consider that victory enough.
Posted by MadMonarchist at 12:47 AM