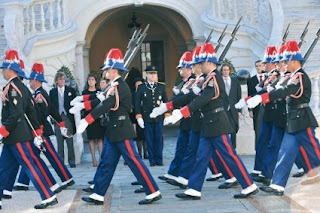 As a protectorate of France Monaco does not have to maintain a large military force (though the police force is extremely large and professional) but the Monegasque military does exist. Of that force, roughly half consists of the "Compagnie des Carabiniers du Prince" or the Prince's Company of Carabiniers. It is this company of foot guards who are charged with the protection of the Sovereign Prince and the Princely Palace. It was formed in 1817 by HSH Prince Honore IV for the defense of the principality and today numbers about a hundred men. The enlisted men and non-commissioned officers are all native Monegasque though, for obvious reasons, the officers are almost always all French and usually veterans of considerable experience with the French army.

Over the years the Prince's Carabiniers have been less expected to actually defend their country but have had to expand their duties into other areas as necessities have arisen. They operate a small naval force to patrol the coasts of Monaco and are trained to respond to disaster situations and even for extreme emergencies in which the country would have to be evacuated. Of course, their primary duty is always the protection of the Sovereign Prince and 2 officers and 8 carabiniers are on guard around the Princely Palace at all times. They also have a rather diverse and expert military band for a small palace guard as they have been called on to perform at a variety of functions, military, social and religious. During the late 19th Century the Carabiniers also had a distinctly religious style about them. When the Papal States of the Church were conquered by the Italian nationalists former members of the Papal army were given shelter in Monaco and the Prince took them on as an additional military force with the Carabiniers. They were known as the "Papalins" and visitors to Fontvieille today can see a road named in their honor.

The Prince's Company of Carabiniers perform valuable service to the Prince and Principality of Monaco, serving in numerous ways and, it is worth pointing out, since the creation of the unit no Prince of Monaco has ever come to harm. They also provide a typically Monegasque color and style to official events and the changing of the guard every day at noon is always a subject of interest for tourists to the Principality. The Sovereign Prince is the commander-in-chief and over the years the Carabiniers have come to play an important ceremonial role in the enthronement of new princes and special occasions are usually marked with service medals being given by the Prince to his soldiers.
Posted by MadMonarchist at 1:02 AM