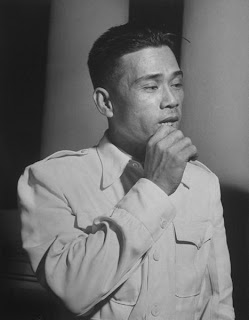 One of the major figures in the State of Vietnam (the anti-communist, French-backed regime led by the former Emperor Bao Dai as Chief of State) was General Le Van Vien, better known as Bay Vien, the leader of the Binh Xuyen organization. The son of a Chinese father and Vietnamese mother, Bay Vien joined the Binh Xuyen gang when he was young and was hunted by the French for his opposition to colonial rule. When the Japanese occupied Vietnam during World War II and finally determined to overthrow the French and support independence for a unified "Empire of Viet Nam" they cooperated with a number of clandestine organizations, including the Binh Xuyen. In the turmoil that followed the Japanese surrender in 1945 Bay Vien and his forces clashed with the French again as the British Indian forces (who had arrived to disarm the Japanese in the south) began to restore the colonial regime to power. After forging some local alliances of his own Bay Vien became the most powerful figure in post-war Saigon.

The Communists, however, had declared their own government in the north and from the outset began to work to infiltrate and dominate the south where they had been kept out of power after the Japanese collapse thanks to the British. Bay Vien recognized the communists as the greater threat and when the State of Vietnam was formed under former Emperor Bao Dai, Bay Vien pledged his support for the regime in return for police power in Saigon and a monopoly over the major businesses in Cholon, the Chinese district. Bay Vien became a general in the National Army of Vietnam and pledged that if given the proper weapons he would "take care" of the communists. The French gave him the hardware and he did as he was promised, virtually eliminating the communist threat in Saigon.

In years since this arrangement has been portrayed as the picture of corruption between the French, Emperor Bao Dai and the Binh Xuyen which was seen as a Vietnamese-style mafia organization. Giving Bay Vien police power was described by not a few as a case of the fox guarding the hen house. However, even if the Binh Xuyen was comparable to the mafia the government agreement with them would have been little different from that carried out by the Roosevelt administration in the U.S. during World War II in New York. However, in reality, this was part of a larger policy by the former Emperor's government to maintain unity against the communist threat in a very fractured society by dealing with local groups, giving them official sanction and control over local affairs in return for their loyalty, usually some tribute to the Emperor, and assistance in fighting the communist threat. Similar agreements were made with the private armies of religious groups such as the Cao Dai, the Hoa Hao Buddhist sect and the central and south Catholics. Say what you will about Bay Vien, he did suppress the communists in his area and he was loyal to the Emperor to the very end.

This set-up changed following the French defeat at Dien Bien Phu and the appointment of the U.S.-backed former mandarin Ngo Dinh Diem as Premier. Diem was, with the best intentions, determined to more firmly unite the country by destroying the private militias and stamping out local autonomy. His first target was the closest at hand; the Binh Xuyen under Bay Vien and he moved against them in what became known as the "battle of Saigon". Bay Vien declared that Diem was trying to grab power and was betraying the Emperor and he vowed to resist and if possible depose Diem in the name of Bao Dai (the Emperor had summoned Diem to France when the trouble began but was ignored). Backing up Diem was American CIA Colonel Edward Lansdale who urged him to take his battle to the Binh Xuyen and the sizeable Corsican community in Saigon. In time Lansdale would also push Diem to deposing the Emperor as Chief of State. As fighting raged street to street the pro-US elements would cheer Diem's forces while the French elements cheered Bay Vien. However, with his primary support having left or leaving the country the odds were clearly stacked against Bay Vien and his forces were defeated.

Bay Vien was forced to flee the country and the victorious troops of Diem returned to the Gia Long Palace shouting their opposition to Emperor Bao Dai who was clearly next on the "hit list" though Diem himself had been a lifelong monarchist. The Binh Xuyen was smashed and retreated back to their jungle stronghold to continue the struggle secretly. Like many Diem made war against a sizeable number ended up making alliances of convenience with the Viet Cong -which they would not survive. Bay Vien flew to France where he lived in exile until his death in 1970.
Posted by MadMonarchist at 1:00 AM