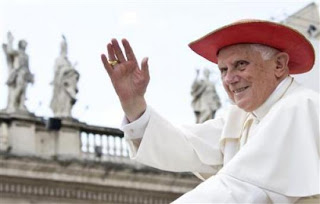 President Obama, the guy the fawning U.S. media has said is "like God", has met with the Vicar of Christ, H.H. Pope Benedict XVI (last Christian absolute monarch in the world). In order to satisfy Obama the audience was held in the afternoon rather than in the morning as is traditional so that Obama could continue on quickly to Africa. Of course, no one knows exactly what was said between the President and the Pontiff but we have been told that the economic crisis, global warming, abortion and embryonic stem-cell research are on the agenda. I can't see the economic crisis causing much of a dust up, I'm sure there will be agreement on environmentalism (sigh, I guess you have to have something to agree on and the Prince of Wales has been beating the Al Gore drum again) but when it comes to the life issues the Pontifex Maximus might have done a little finger-wagging at the most pro-abortion president in U.S. history. I would have loved to be a fly on the wall of the Apostolic Palace for that exchange. I'm sure Obama assured the Pope he's in favor of making abortions less common (and that's what we all want to do with things like theft, rape, murder etc, just make them less common rather than stopping them -and that's sarcasm if you couldn't tell). The one good thing is the gift-giving formality of this meeting. Evidently Obama went to the experts this time and presented to Benedict XVI a 2nd class relic, the stole of St John Neumann donated from St Peter's Church at the saint's shrine. Say what you will, it is at least an improvement over DVD's, an Ipod of his speeches or junk from the White House gift shop. The Pope also reportedly gave Obama a letter to deliver to Catholic Senator Ted Kennedy, perhaps a warning from the Pontiff that the Senator needs to repent and confess -for the Kingdom of God may be soon at hand for Teddy.

Posted by MadMonarchist at 2:38 PM