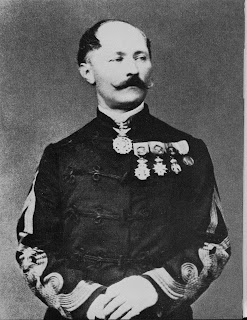 One of the most zealous defenders of the Mexican Empire was the Belgian soldier Alfred Baron Van der Smissen. He was born in Brussels on February 1, 1823 and began his military career in 1843 when he was 20 years old. Rising to the officer corps of the Belgian army, he saw combat for the first time in 1851 fighting with French troops in North Africa after the Algerian tribes rose up in rebellion against France. In a campaign spanning 26 battles in 80 days Van der Smissen gained valuable experience at how to fight a war against guerilla forces and the suppression of irregular, revolutionary forces. This experience was undoubtedly a consideration when he was given command of the Belgian troops sent to Mexico.
When Emperor Maximilian and his Belgian wife Empress Carlota went to Mexico in 1864, King Leopold I of the Belgians was naturally concerned about the safety of his daughter and so he authorized the formation of the Belgian Foreign Legion consisting of a Grenadier and a Rifle Battalion and Lieutenant Colonel Van der Smissen was given command. The Austrians did the same, but unlike the Austrian Volunteer Corps, which consisted of many veterans of battles in Europe, the Belgian Legion was made up of new units filled with very young men, the vast majority less than 25 years old, who had never served in the army before. The troops were inexperienced volunteers, only Colonel Van der Smissen and his deputy Major Tigdal had ever been under hostile fire before, but they were tough and determined and soon had their trial by fire.
Not long after arriving in Mexico, the Belgian Legion barely survived a horrific battle against vastly superior republican forces on April 11, 1865 at Tacambaro in the state of Michoachan. It was their first test of combat and their lack of experience was to cost them dearly. Out of the 300 Belgian soldiers under Major Tigdal participating in the battle with the Mexican Imperial forces, 110 were killed, including Major Tigdal, a vital commander, as well as two captains, Chazal and Delaunay, and three lieutenants. The 190 men, including three officers, who survived were forced to surrender. The news spread fast, especially since one of the dead officers, Captain Chazal, was the son of the Belgian Minister of War. It was a brutal experience, but lessons were learned and the Belgians immediately became battle hardened veterans.
Later, on July 11, 1865 the Belgians returned to the scene of their earlier defeat at Tacambaro and this time soundly defeated the Mexican republican forces, regaining for the honor of their country what had been lost three months earlier. Taking the name of their beloved Empress Carlota, the Belgian Legion was given the honor of bearing the title of the Empress' Guard and Colonel Van der Smissen was a favorite of the Empress, who perhaps was more trusting of a fellow Belgian in a country where so many had deceived and betrayed her. Van der Smissen, however, did not have the compassionate soul of his Empress. The stunning losses in the first battle of the Belgian Legion made him cautious for a time, but Van der Smissen was an aggressive and bold soldier, always advocating the offensive and force to the utmost.
The early initial losses also spelled the doom of any small hope of an independent command for Colonel Van der Smissen and, like Carlota, he was not on very good terms with the top French commander Marshal Bazaine. That was no fault of the Colonel's, Bazaine simply didn't like Belgians in general. Bazaine was also looking to withdraw from Mexico longer than anyone in Mexico City knew and so was more cautious and conservative with his forces as time went on. Van der Smissen was as aggressive as ever. When word came that a massive republican column under Escobedo was marching down from the north the bold Belgian proposed a dramatic move. He urged the Emperor to lead a division against them composed of a Mexican brigade to be led by Colonel Miguel Lopez, 2 battalions of the French Foreign Legion, General Tomas Mejia as chief-of-staff and himself in command of the Austro-Belgian brigade that would be in the vanguard. He begged to lead the attack against the enemy and vowed that a great victory would be won, no less than 3,000 prisoners taken and thousands more would rally to the Empire. Maximilian was taken with the idea, but nothing ever came of it. It does, however, reveal alot about the style and temperment of the Belgian commander.
The situation changed, to the doom of the Imperial couple, in 1866 when the United States pressured Napoleon III into withdrawing his forces from Mexico, in spite of the promises he had made to Maximilian to remain until Mexico was united and stable. On December 6, 1866 the Belgian Foreign Legion was officially disbanded and the majority returned home, Colonel Van der Smissen along with them. By the end of his service he had been promoted to full Colonel and had earned the honors of being a Knight Officer of the Order of the Mexican Eagle and Knight Commander of the Imperial Order of Our Lady of Guadalupe as well as the Golden Medal for Military Merit. Later, In 1868 he was awarded the Knight's Cross of the Order of Leopold by the Emperor of Austria in recognition of his service in Mexico to Maximilian.
Once back, he became the commander of the Belgian Royal Guards and in 1882 was given command of the Brussels military district. It was in this capacity that he suppressed a rebellion by disgruntled workers at Charleroi in 1886. He wrote about his adventures in Mexico in his book, "Souvenirs of Mexico" and died in Brussels on June 16, 1895 at the age of 72, a victim of suicide, as a lieutenant general and one of the most respected officers in the Belgian army.