The Abdication of Leopold III 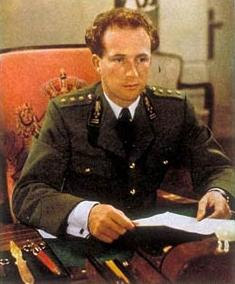 It was on this day in 1951 that His Majesty Leopold III, King of the Belgians, abdicated his throne in favor of his son Crown Prince Baudouin. I have always had slightly mixed feelings about this as I am biased by the fact that I consider King Baudouin to have been one of the greatest monarchs to have reigned since the Second World War. I see him as a monarch who behaved with the greatest regal dignity, showed great foresight and good judgment and who displayed immense moral courage. I am thus thrilled that he became King and that the world had him for as long as it did. That being said, I have also always felt that King Leopold III has been one of the most unjustly maligned monarchs of his time; and continues to be so without the slightest justification. First, however, a little background.
Leopold was born in 1901, son and heir of the great “Soldier King” Albert I who gained fame for his gallant leadership of the Belgian Army during World War I. As crown prince, the teenage Leopold won considerable admiration as well for joining the army and serving in the trenches as a regular soldier. He completed his higher education after the war and in 1926 married Princess Astrid of Sweden. They were young, handsome, devoutly religion and very devoted to each other and soon had three children. Everything must have seemed perfect. Then, in 1934 Leopold was thrust into kingship by the sudden death of Albert I in a climbing accident. Only a year later his beloved Queen and fourth (unborn) child were killed in a car accident in Switzerland. However, the greatest test and most controversial period of his life came with the onset of World War II and the German invasion of Belgium in 1940.
After the hard lessons of World War I King Leopold III had not neglected military defense and the Belgian army performed heroically in the practically hopeless fight against Nazi Germany. Luxembourg was occupied in a day, the Dutch surrendered in four days but Belgium held out for 18 days. Yet, others at the time and since have feigned outrage when King Leopold III announced the surrender of Belgium and that he would not go into exile but would stay in Belgium and endure the occupation along with his people. Some then and since viewed this as a sell-out of the Allied war effort, however, Belgium itself had been sold out with many of her compatriots already looking to their own escape while the Belgians sacrificed themselves buying time for them. Yet, simply by staying behind many have tried to portray the King as some sort of collaborator when nothing could be farther from the truth. He was kept as a virtual prisoner by the Germans, refused all of their efforts to deal with him and Belgium was placed under military rule. There were, in fact, strong factions in the Nazi camp, especially the Dutch and Flemish Nazi collaborators who wanted a "Greater Netherlands" who wanted to destroy Belgium completely as a country. Toward the end of the war SS Chief Henry Himmler had the King arrested and taken to Germany where he was not freed until the arrival of American troops.
Leopold III went into what was thought to be a temporary exile in Switzerland while his return to Belgium was discussed. The divisions came out and it was eventually decided to put the issue to a vote after the King had been legally cleared of all charges of collaboration (another fact that is often ignored). The result was a majority of Belgians voted for their King to return and yet the losing side loosed a series of strikes, riots and clashes with the authorities. It was only then that Leopold III, despite winning the vote, decided that if his return would cause divisions among his people that he would abdicate. Yet again he put his people and country ahead of himself and pass the throne to his son Baudouin. He continued his intellectual pursuits until his death in 1983.
*Edit: To read some text from King Leopold's abdication and a video of the event check out this post at The Cross of Laeken where plenty of other info on Leopold III can be found.
Posted by MadMonarchist at 4:09 AM