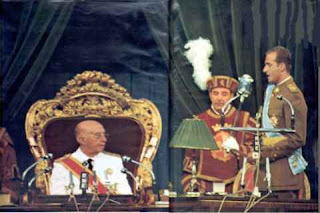 It was 40 years ago today that Don Juan Carlos de Borbon y Borbon was formally recognized by the Spanish state as a Prince of Spain. Before the Cortes and Generalissimo Francisco Franco he swore loyalty to the national movement and the chief of state. There were still some ruffled feathers amongst the Bourbon dynasty because of Juan Carlos being chosen instead of his father as heir to the throne, but it was a happy occasion. Stability had been ensured and the first steps taken toward the full restoration of the monarchy. Of course, King Juan Carlos did not remain loyal to the national movement (Falangism) but he has never criticized Franco and refuses to tolerate anyone speaking ill of him in his presence. Today many people think that scandalous but there is not a doubt in my mind that the better side won the Spanish Civil War and say what you will about Franco he did see to it that the monarchy was eventually restored, he kept the country together, gave a chance for some stability and growth and restored a proper respect for religion in national life. Spain was virtually a different country then compared to now. Hopefully the Spanish can work back to the good aspects and drop all the current secular nonsense.