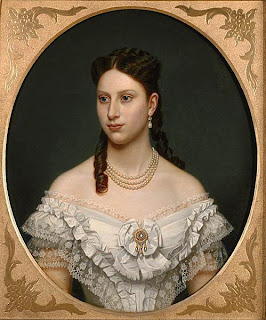 Queen Lovisa of Denmark was born on Halloween, 1851, to King Charles XV and Queen Lovisa of Sweden and Norway. The King and Queen of Sweden and Norway had only one other child besides Lovisa; their son Carl Oscar. However, when he died young the distraught monarch began to raise his daughter in the rough manner of a boy. She was a happy child, good natured, treated with the crude affection of a son by her father who once said, "She's an ugly devil but she's funny!" There was some talk about her being able to succeed to the Swedish throne but it would have required a change in the succession laws of both Sweden and Norway and when the King's brother had a son the issue was dropped.
In 1869 Princess Lovisa married Crown Prince Frederick of Denmark amid great celebrations. Although Sweden was suffering an economic slump at the time the people all contributed to give her a suitable dowry. Early on there were rumors that that dowry was the only reason Frederick married her. In any event, there was to be little wedded happiness for Lovisa who became Queen consort in 1906 when her husband succeeded to the throne as King Frederick VIII of Denmark. The once cheerful and outgoing woman became withdrawn, embarassed and hurt by her husband's infidelities. She also became very devoutly religious and insisted on the highest moral standards as she raised her own children, being highly protective of them. Even her elevation to Queen was somewhat marred by the fact that only the year before Sweden had been forced to agree to the independence of Norway. Denmark had supported Norwegian independence and the uncomfortable feelings this produced between Sweden and Denmark meant that Queen Lovisa was unable to visit her homeland for some time which had been about her only periods of real happiness after her marriage.
Only six years after becoming Queen she also became a widow with the death of King Frederick in 1912. She never truly felt as though she fit in with the Danish Royal Family and they tended to view the Queen as rather cold and distant, though this was certainly the result of her husband's behavior as she had earlier been known for being quite the opposite. Nonetheless, she did her duty like a true royal, suffering in silence and devoting herself to her children, her position and her Christian faith. She died on March 20, 1926 in the Amalienborg Palace.
Posted by MadMonarchist at 12:16 AM