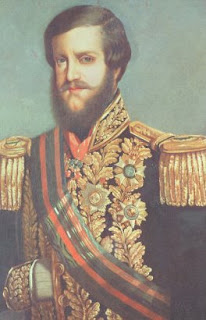 Dom Pedro II of Brazil may hold the record for being the most popular "last monarch" in the world. He was an intelligent, likeable and widely beloved and respected man and yet somehow he had the fate to become the second and last Emperor of Brazil. He was only five years old when his father, Emperor Pedro I of Brazil and King Pedro IV of Portugal, abdicated in his favor on April 7, 1831. His elder sister would go on to be Queen of Portugal but as Pedro II had been born in Brazil after the declaration of independence he was a foreigner in Portuguese law and was considered the first "home grown" Brazilian monarch. As the son of a Braganza father and a Hapsburg father he had many royal family relations. Emperor Napoleon of France was his uncle and he was a first cousin to the nominal Emperor Napleon II of France, Emperor Francis Joseph of Austria and Emperor Maximilian of Mexico.

For the first nine years of his reign he was acted for by a regency during which time the country was plagued with instability and so, in 1840, he was declared of legal age early in order to fully assume the throne. He was crowned on July 18, 1841 and immediately had to deal with the regional conflicts that had brought about his early accession to the throne. At first these rebellions had the stated aim of restoring his father to power but after his death were carried on over contested elections as different groups struggled for power. Pedro II had a great deal of intellectual curiosity and genuine concern for his people and viewed his role as Emperor to act as an impartial umpire amidst the struggling factions. With his imperial authority, winning personality and the military support of the Duke of Caxias he felt able to deal with any crisis.

As Brazil was still a young country Pedro II was quick to ensure that Brazilian national sovereignty would be respected and did not back down whether dealing with smaller local nations or greater powers like the United Kingdom and the United States. In 1864 he led Brazil into the War of the Triple Alliance against Paraguay and by the end of the war in 1870 he had enlarged the national territory and effectively made the Brazilian Empire the dominant power in South America. It was no coincidence that during these war years his cousin in Mexico, Emperor Maximilian, envisioned a New World that would be overseen by the United States in the north, the Brazilian Empire in the south and the Mexican Empire in Central America. Pedro II, a calm and serious man, was a tower of strength in a time of crisis and became a comforting figure for Brazil. His interest in innovation meant that during his reign coffee supplanted sugar as the primary cash crop, railroad construction was rapidly expanded and more and more cities across the country were linked by telegraph. The economy stabilized and prospered, growth and expansion was everywhere and the country enjoyed a high reputation among the Latin American powers. Things seemed to be going great and Pedro II was extremely popular.

The Emperor was able to maintain a balancing act between the liberals and conservatives quite effectively. Whereas other countries in the region were torn by constant civil wars between these two factions, under the Emperor's guidance Brazil had peaceful and orderly transitions of power though that power continued to be largely concentrated in the hands of the land-owning planter class. Ultimately, the thurst for power among these elites would lead to the downfall of the monarch who seemed a permanent and popular fixture of Brazilian life. He was too progressive for the likes of the oligarchs and they began to hunger for total power rather than simply a large share of it. The final straw came when Pedro II began to slowly phase out the institution of slavery. For a country with a plantation-based economy like Brazil the Emperor knew this would be difficult and tried to lead by example (he freed all of his own slaves as early as 1840) and to enact changes little by little over time. Republicanism had begun to creep in amongst the urban liberals and some in the middle class and in time the republican idea would be seen by numerous factions as their path to power.

Pedro II did not help his cause by trying to be so tolerant and modern-minded. His rolling back of slavery cost him a great deal of support amongst the elites, his liberal ideas turned off many in the military and he lost crucial support from the Catholic Church by opposing their anti-Mason regulations after 1872. His political tolerance also meant that known republicans were allowed to gain and hold high positions both in the government and in the military. Pedro II also spoke at various times as though it mattered little to him whether the country was a monarchy or a republic, which gave little confidence to those inclined to uphold the Crown. In 1888, while his daughter Isabel was acting as regent, slavery was officially abolished and some 700,000 slaves were freed without their owners being given compensation. For many of the landed elites this was the last straw. Pedro II was still supported by a large majority of his people but on November 15, 1889 a military coup forced him to abdicate. He and the Imperial Family went into exile in Europe and died in France in 1891. In 1920 his remains and those of his wife were finally returned to Brazil and buried with full honors.
Posted by MadMonarchist at 5:09 AM